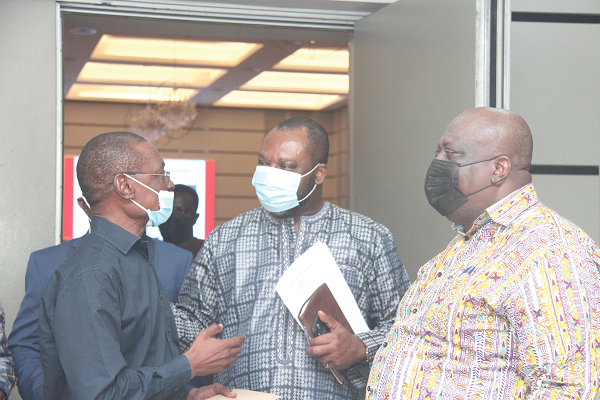 Dr Matthew Opoku Prempeh (middle), Minister of Energy, having a chat with Mr Jonathan Amoako Baah (right), CEO of GRIDCo, and a participant at the media engagement
30.5k Shares

The Minister of Energy, Dr Matthew Opoku Prempeh, has tasked managers of the country’s electricity power system to communicate to the public in good time the reasons outages may occur at certain times in order for people to plan their lives accordingly.

That was because reliable and affordable power supply was crucial to the everyday lives of the people, he said.

Dr Opoku Prempeh gave the charge at a stakeholder engagement organised by civil society organisations (CSOs) on the electricity supply situation in the country currently.

He observed that since the beginning of this year, the country had been experiencing power supply interruptions for various reasons.

The reasons, he said, bordered on feeder outages in Kumasi, which were due to the conservative dispatch of power from the Bui Dam, coupled with intermittent transmission trips, as well as gas and fuel related shortages, among others.

A combination of those, he said, resulted in a system collapse on March 7, this year.

The meeting was attended by officials of the Electricity Company of Ghana (ECG) and the Ghana Grid Company (GRIDCo).

The CSOs present were the African Centre for Energy Policy (ACEP), Imani Africa, ISODEC and Consumer Protection Agency, along with other industry players.

Dr Prempeh said the power system  was a complicated one and involved complex machines and instruments.

Under the circumstances, he said, maintenance of the system processes had to be scheduled in order that the machines would not break down.

“However, there are occasions when the system experiences unplanned faults, leading to outages that last a while before restoration,” he said.

While emphasising that the present outage challenges had nothing to do with generation deficit, Dr Prempeh said, all the same, should a request come from GRIDCo for the ECG to drop load or supply, that would be done in order to ensure that the power system did not suffer either partial or total collapse.

The Director of Systems Operations at GRIDCo, Mr Mark Baah, said GRIDCo undertook projects by way of load forecast which went to improve its transmission capacity for power evacuation.

He said the company had since 2008, added a number of transmission facilities to what already existed, adding, however, that delays in the implementation of certain projects owing to financial lag often went to compound the challenges the company faced.

He said the goal of GRIDCo at the moment was to make sure that every sub-station met the criterion of transformer maintenance schedules being carried out without having communities experience outages.

“Presently, we have excess capacity of power totalling 5,000 megawatts (MW), against our demand of 3,100MW, and if the economy is to grow, we may need some 500MW more, in addition to other strategic additions, such that we can have redundancies that will not go to impact the consumer negatively,” Mr Baah said.

The Managing Director of the ECG, Mr Kwame Agyemang-Badu, said the company was instituting a task force project that would work to reduce commercial and technical losses which continued to plague the company.

He said some businesses had deployed means of connecting power illegally at night and “our hope is that the public will help us by reporting such illegalities,” he said.

On tariffs, he said the ECG had made proposals to the Public Utilities Regulatory Commission (PURC) for waivers and was awaiting the reconstitution of the commission’s board of directors, so that its request could be considered.

The Executive Director of ACEP, Mr Benjamin Boakye, called for more efficiency in the power supply system, considering that players in the sector had been inconsistent in their approach to addressing the situation of power outages.

He said whereas demand for power had gone up, transmission infrastructure had remained inadequate, leading to the knock downs.

“We are told that when the Pokuase and the Mallam systems are completed, we should have some stability on the grid transmission lines. However, we will be happy if the players could come up with a timetable, considering that the installation works currently underway will run until September, and this can go to affect peak demands,” Mr Boakye said.