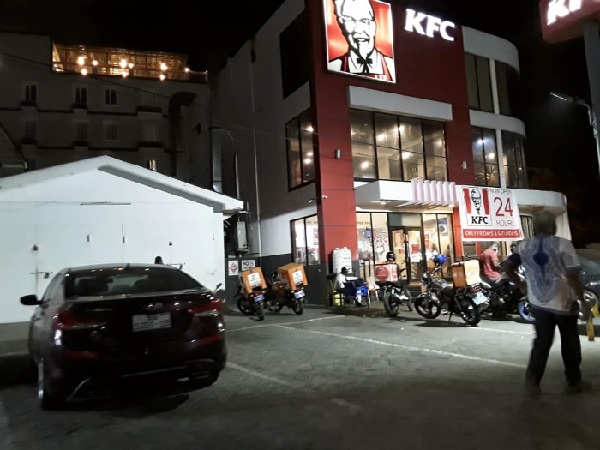 KFC at Osu in Accra was observing the safety protocols
30.5k Shares

Contrary to the President’s ban on certain social activities, some pubs, nightclubs, drinking spots and bars in some parts of Accra are operating partially with little adherence to the COVID-19 safety protocols, reports Charles Andoh.

The President, Nana Addo Dankwa Akufo Addo, in his 23rd COVID-19 address to the nation on January 31, 2021, ordered the closure of pubs, nightclubs, drinking spots and bars as part of measures to curb the spread of COVID-19.

The Mirror’s visit to some restaurants, however, found no customers seated to have a meal. Rather, customers took their orders away in compliance with the President’s directive and observed some level of safety protocols.

The President said: “Until further notice funerals, weddings, concerts, theatrical performances and parties are banned. Private burials with no more than 25 people, can take place, with the enforcement of the social distancing, hygiene and mask-wearing.”

Earlier this week, the police arrested 24 people at various points in the Greater Accra Region for allegedly flouting the presidential directive on the closure of pubs, nightclubs and drinking spots.

Patronage
Visits to some joints in the capital last Tuesday and Wednesday nights showed that even though the number of people who patronised the pubs and nightclubs had reduced, some were still having a good time there.

The others were Afrikiko Restaurant at Kanda, Honeysuckle Pub and Restaurant at Osu, Payee at Adabraka, and Zen Garden at Labone.

At some of the joints, the revellers came around to sit and chat while at other places, they spent few minutes and left for fear of being apprehended.

At Lapaz, some drinking spots were operating on tables by the roadside as of 10p.m. At about 9p.m, a group made up of about 10 people had gathered around a table at Adabraka dining and wining without observing any physical distancing.

An operator who only identified himself as Kwame, said: “We cannot sit down for our only source of income to be taken away from us.”

The Nhyira Pub at Circle was operating partially — no music was being played but people were patronising their services.

“So far we are observing the protocols, I think I can operate because we also need money to survive,” Isaac, the operator at the pub, told The Mirror.

Even though some level of safety protocols were observed at the Zen Garden at Labone, some customers were enjoying their meals at the time of the visit around 8.30p.m.

They declined to speak when The Mirror team approached them.

Adherence
At the KFC branch at Osu, both the workers and customers were observing the COVID-19 protocols strictly.

There were hand washing stations at the entrance for people to wash their hands, as their temperature was also taken before entry.

At the hall, customers were made to stand apart from each other, while they bought their food and left the place.

Similar observations were made at the Papaye branch at Osu.

A security man at the eatery who wanted to remain anonymous said the COVID protocols were being observed to the letter at the place.

Sunyani
From Sunyani, Bilya Mukusah Ali reports that cinema and bar operators within the Sunyani municipality were not complying fully with the ban on their activities.

A tour of some of these facilities showed that the operators were yet to come to terms with the new directive.

Some of the places visited were Dreamers, Stamford Bridge, the Place and Down Town.

A visit to these venues showed that they were fully operating though the centres were not as busy as they used to be before the directive.

Between 4 p.m. and 6.30 p.m. last Tuesday when The Mirror visited these centres, workers were seen arranging tables and chairs to receive patrons.

At the Stamford Bridge, Dreamers Joint and Down Town, a few tables and chairs had been set up to receive patrons but their musical instruments were covered.

Tema
In Tema, bars, pubs and restaurants in most parts of the metropolis were operating at a minimal level, reports Benjamin Xornam Glover.

In some communities that were visited between Monday and Wednesday, it was obvious that the hitherto bubbly atmosphere in some selected hangouts in the metropolis was missing.

Although some of these bars and eateries were open for business, customers were either offered seats and tables arranged in a socially distanced manner or offered take-away food and drinks.

At the Papa’s Pizza joint in Community 4, customers were not allowed to sit on the premises to have their meals and had to take their orders away.

The situation was not different at T-Havana Parks at Community 9, as the usual bubbly atmosphere had given way to a calmer one, with tables and chairs which used to host crowds of people parked in the open spaces at the time of our visit.

At the Agyaee Pub at Tema Community 8, patrons were seen seated in a socially distant manner with some watching football on a big screen while others sipped their drinks.

Also at the Queen Sheila Pub at Community 8, a handful of customers were spotted sitting in the open.

Some of the patrons who spoke to The Mirror said the restrictions had impacted negatively on social life, however, that would not deter them from occasionally coming out to interact or meet up with friends and acquaintances.

“As you can see, even though we are having some time out here, we are all wearing our masks, although I must admit it is not convenient having a drink or two but that is the new normal,” Mr Albert Takyi Manu, a patron at one of the bars stated.

One of the business operators, who would not want to be named, said some of her staff had been designated as marshalls to ensure that patrons who called at her eatery observed the COVID-19 protocols.

Kumasi
In Kumasi, the regional capital of the Ashanti Region, the effect of the restrictions was yet to be felt by nightlife lovers as some pubs operated in the open, reports Kwadwo Baffoe Donkor.

Currently, most of these pubs operate in an open area by the roadside because operators believe that reduced the risk of spreading or contracting the virus.

One of such operators on the busy Bantama street told this reporter that during the lockdown, most of them had to close their shops. “Business is just picking up and closing down again will seriously affect us.”

He explained that since the bar was in an open area and the chairs were widely spread “we can still observe the social distancing here. This place is much safer than the markets and yet traders are allowed to go to the market,” he said.