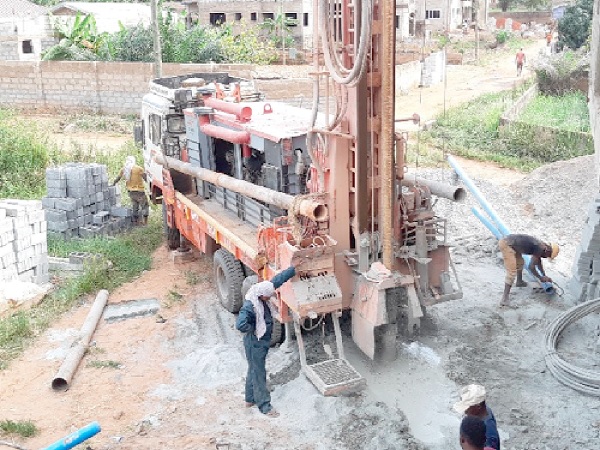 A drilling machine at work

The Water Resources Commission (WRC) has cautioned individuals and drilling companies against constructing boreholes, wells and fish ponds without obtaining the requisite licence.

According to the commission, failure to obtain a water drilling licence from the WRC could end one in jail.

The Executive Secretary, Mr Ben Yaw Ampomah, disclosed this in Accra to The Mirror.

The Drilling Licence and Groundwater Development Regulations Legislative Instrument (L.I.) 1827 (2006) guides the regulation and management of water resources in the country.

It also mandates fish pond operators to acquire a permit before constructing ponds on a small or large-scale.

Offences
Regulation 23 of the LI 1827 (2006) states that: “A person who carries out or allows the carrying out of well drilling activity for the abstraction of water without a licence from the commission commits an offence and is liable on summary conviction to a fine of not more than 200 penalty units or imprisonment for a term of not more than 12 months or to both.

“A licence holder who conducts drilling activities contrary to the conditions of the licence commits an offence and is liable on summary conviction to a fine of not more than 250 penalty units or imprisonment for a term of not more than two years or to both.”

Mr Ampomah said it was also an offence not to renew one’s licence as a driller since that was also made explicit in the law.
Regulation 10 of the LI 1827 (2006) states that: “A person who fails to renew a drilling licence issued by the Commission, or whose application for renewal is rejected by the Commission shall not construct or begin to construct a well for the abstraction of groundwater and the monitoring of, or research into groundwater.”

Action
So far, the executive secretary said the commission had started taking action by arresting those who went against the law.

“Since we started, people have been coming in to register and make enquiries on what to do. As of now, more than 100 drillers have been registered, and we urge the others to comply with the law.

“We have also been holding workshops and training for the operators on the need to do the right thing for the general safety of Ghanaians and the nation as a whole,” he said.

Mr Ampomah advised the public not to engage masons and plumbers to build wells for them, as the law required only those with the requisite knowledge, skills and drilling machines to do so due to the work involved.

Apart from that, he said if one engaged a licensed driller and the company faulted, it would be easier for the commission to take swift action against the company involved.

“Underground water has to be done by those with the required knowledge, experience and machines to do so.

“But generally, we advise people not to engage those who are not professionals in order not to endanger the lives of people because constructing boreholes involves a lot of skills,” he emphasised.

Report
Mr Ampomah urged the public to report their concerns to the commission, especially if their boreholes were not done by the right people.

He added that the commission had also been carrying out educational campaigns to keep people abreast of issues in the area, adding that “we will be doing more going forward.”