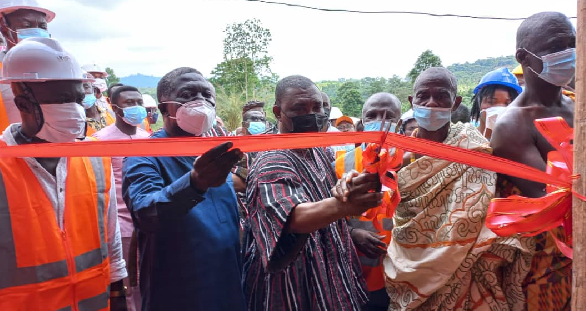 • Mr. George Mireku Duker (middle) being assisted by other dignitaries to cut the tape to inaugurate the community mining site Follow @Graphicgh

The Deputy Minister of Lands and Natural Resources, Mr. George Mireku Duker, has cautioned community miners to keep their sites neat and to adhere to all mining safety protocols or risk losing their concessions.

He said there was no difference between community mining or small scale mining and large scale mining when safety protocols were concerned, and as such all safety and sanitation measures should be adopted and the site run as a business.

He said the site should have an office, a changing room, a toilet facility and be kept neat and orderly.

Mr. Duker gave the advice last Friday at Adukrom in the Ahafo Ano South East District in the Ashanti Region when he commissioned the community mining site for the people of the area.

He said with the exception of the size, community or large-scale mining should be run as a formal business.

He said there was the need for the operators to have a first aid centre, a place of convenience and a uniform to identify them.

“And if in two months time we come back and you don't have all these things in place, you can be closed down,” he warned.

The deputy minister, who is also the Member of Parliament for Tarkwa Nsuaem, said about 7,000 youth from the district were expected to be employed at the site, while few other hundreds would also be employed in the value chain of the mining sector.

He said technical officers from the Minerals Commission would be assisting the community miners with technical support, while the government would also provide them with the mining equipment to ensure that the site was mined in a sustainable and responsible manner.

He said there was a new technology called gold catcher that could help in recovering about 95 per cent of the gold from the rocks.

He appealed to other large mining companies in the country, who had large tracts of land that would not be put to use in the nearest future, to cede part for community mining.

He said that would help to reduce the incidence of illegal mining in the country.