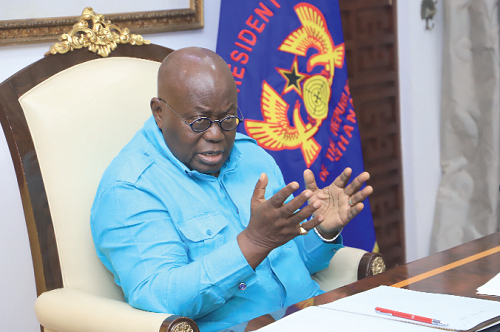 President Nana Addo Dankwa Akufo-Addo has stated that he has not shirked from fighting against corruption and will not retreat in ensuring that people manning state anti-graft agencies acted in the interest of Ghanaians.

“I don’t think that any government has mobilised resources to give opportunity for the anti-corruption agencies of the state to function efficiently as possible as this government has done. It is a matter of record,” he added.

The President said public money had been invested in Parliament, the judiciary, police, the Commission on Human Rights and Administrative Justice (CHRAJ), the Economic and Organised Crime Office (EOCO) and all the institutions whosejob it was to be watchdogs of the state, without which investment a lot of the talk about fighting corruption would remain exactly talk.

President Akufo-Addo stated this when he interacted with the leadership of the Ghana Anti-Corruption Coalition (GACC) and allied national civil society groups working on governance issues when they called on him at the Jubilee House in Accra yesterday.

The group, led by the Chairman of the GACC, Nana Osei-Bonsu, raised issues about corruption perception, the need to revisit a constitutional review and the deepening of local governance.

President Akufo-Addo noted that if the institutions tasked to fight corruption were not capable of doing so, all the talk about fighting corruption would be meaningless.

He said resources to the anti-corruption institutions had been increased since 2017 and that resourcing them had led to the expansion of the capability of the institutions to hire more people, which the President said, was an important indication of the determination to deal with corruption.

Touching on the involvement of the Judiciary in the fight against corruption, President Akufo-Addo said with such an institution, he was “very reluctant” to tamper with it because he respected the separation of powers and its independence.

President Akufo-Addo said there was the need for all to be very careful of a situation where people who had not gone through due process were condemned and stigmatised as having acted in an improper or corrupt manner.

He said the wheels of justice, though they ground slowly, were still the forum that must be resorted to so that people would have their say and defend themselves.

The President added that people had been in court for a long time and had come out clean, while others had also been convicted.

President Akufo-Addo said there were many areas and issues that the coalition had raised that he had reservations about, but he was encouraged by the diligence by which their organisations continued to work with the determination to raise issues of relevance for public scrutiny and also bring to the notice of Ghanaians.

The President gave the assurance that the government was acting on some of the findings of the Auditor-General which needed immediate attention.

He added that some of the officials had also not had the benefit of responding to some of the queries raised in the report and that they would also have the opportunity to react to the allegations before action would be taken.

President Akufo-Addo said the mere allegations against public officials did not amount to improper conduct because the affected persons must also be listened to for their explanation.

Regarding the Auditor-General, Mr Johnson Akuamoah Asiedu, still acting, the President said although he was the direct successor to Mr Daniel Yaw Domelevo, he wanted the man to be given sufficient time to develop the confidence of the population, rather than rush the appointment for people to think that they wanted to plant him.

He said Mr Asiedu had demonstrated sufficient quality, especially with the compilation and presentation of 12 statutory reports to Parliament.

On the constitutional review, the President said he believed in a process which emanated from the representatives of the people, with the backing of the population and not an initiative of a President who would also be enjoined to act upon it.

Speaking on behalf of the civil society groups, Nana Osei-Bonsu said they were worried about the state of corruption perception in the country.

"We will like to reiterate concerns about the creeping normalisation of corruption among the populace and the threat it poses to our development aspirations to move Ghana Beyond Aid to an economically independent, confident, peaceful, and prosperous nation," he said.

The group said recent happenings in the country raised concern that the government was not providing the public with a clear pathway for dealing with corruption.

"We are afraid that we are falling back into the cyclical problem that existed before the adoption of the National Anti-Corruption Action Plan (NACAP- 2015-2024) in 2014 by Parliament as the country’s long-term strategy to combat corruption," Nana Osei-Bonsu, who is also the President of the Private Enterprises Federation (PEF), said.

The civil society groups also called on the President to take a second look at the report of the committee that reviewed the 1992 Constitution to address all outstanding issues.

"Concerns have also been raised in various quarters about limitations of the 1992 Constitution which informed the review process initiated under the administration of the late Prof. Mills.

“Mr President, the work of the Constitutional Review Commission (CRC) failed to reach its logical conclusion. The substantial resource investment in the constitutional review process requires a re-look at the outstanding issues and the review process so far.

“We will, therefore, appreciate updates on measures taken by your administration in that respect," Nana Osei-Bonsu stated.