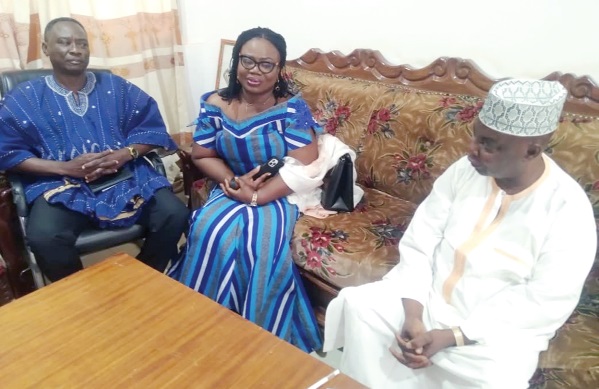 The Executive Director of the Economic and Organised Crime Office (EOCO), Commissioner of Police (COP) Maame Yaa Tiwaa Addo-Danquah, has called for stronger collaboration between security agencies towards dealing with crime.

According to her, criminals were well organised for which reason it was important for all law enforcement agencies to be better organised to deal with them.

“We can only be better organised when we effectively collaborate and cooperate with another and provide the needed assistance to each other in our quest to efficiently tackle crime in the country,” she said.

COP Addo-Danquah was speaking in an interview with the media at the end of a day’s working visit to the Upper East Region last Wednesday, September 28, 2022.

The visit formed part of a familiarisation tour, the first since she assumed office as the head of EOCO.


She was accompanied by the Deputy Executive Director in charge of Operations at EOCO, Nana Antwi and the Director of Administration, Edward Cudjoe.

Firstly, she paid a courtesy call on the Chief Director of the Upper East Regional Coordinating Council (RCC), Alhaji Abubakari Inusah, and also visited offices of the Bolgatanga Taxpayer Services Centre of the Ghana Revenue Authority (GRA) and the regional office of the National Intelligence Bureau (NIB).

COP Addo-Danquah noted that EOCO could not discharge its mandate alone, and as such would need the collaborative support of other security and law enforcement agencies .

“Although the already existing collaboration between EOCO and other security agencies is very good, there is the need for the scaling up of the partnership for our mutual benefit.

“The essence of my visit since assuming office is to meet with key stakeholders like the Ghana Police Service, GRA, Ghana Immigration Service (GIS), NIB whose work directly impact on the work of the EOCO too” she said.

She stated, for instance, that combating anti human trafficking which was part of EOCO’s mandate, always called for the support of the immigration service to be able to arrest perpetrators and bring them to book.

“As law enforcement agencies, none of us can work in isolation and as such there is the need for us to build a mutually beneficial relationship so that we can assist each other in the discharge of our respective mandates,” she said.

The Executive Director indicated that her outfit would offer the needed support to the GRA to rake in more revenue for the government to drive the development of the country.

She noted that EOCO would continue to go after private businesses who operated on the blind side of the GRA to evade tax as well as others who under-declared their profits in order not to pay the appropriate tax to the state.

In protecting the public purse, COP Addo-Danquah said EOCO would continue to recover funds from persons indicted in the Auditor General’s report and monies paid back into the consolidated fund.

“Those indicted in the AG’s report that we think are prosecutable will be thoroughly investigated and dockets forwarded to the Attorney General’s office for possible prosecution,” she stated.

The Deputy Office Manager of the Taxpayer Services Centre of the GRA, Bolgatanga, Alexander Nyarko, in a brief remark, commended EOCO for its support to the GRA in meeting its revenue targets.

For his part, Alhaji Inusah appealed to EOCO to assist the Regional Coordinating Council to deal with absenteeism among some staff of the 15 Municipal and District Assemblies (MDAs) in the region who did not go to work but drew their salaries on a monthly basis.