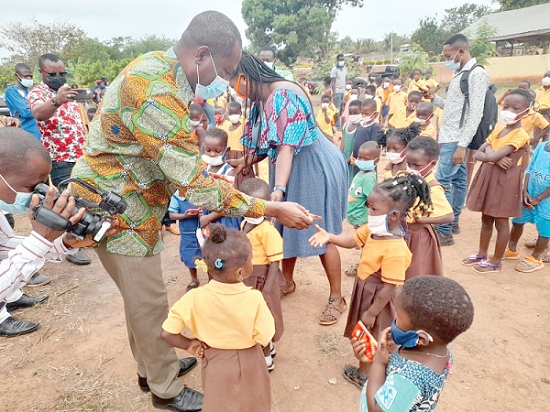 As part of activities marking this year’s Chocolate Week, the Chief Executive Officer of the Ghana Cocoa Board (COCOBOD), Mr Joseph Boahen Aidoo, interacted with pupils of the Boaso and the Twewaaho MA Basic schools in the Tano North and the Tano South municipalities, respectively, in the Ahafo Region.

He distributed bars of chocolate to them and encouraged parents and guardians to include cocoa products in the diet of their children and wards for them to derive the benefits contained in cocoa.

"Apart from the support cocoa provides for Ghana's economy, it is also very important for the body and, therefore, everyone needs to consume some amount of cocoa every day.

"The inclusion of the okro-like fruit of cocoa and other ingredients in the preparation of stew, especially by farmers, makes their stew a chocolate recipe", he said.

He added that the consumption of cocoa increased the intelligence of children, and buttressed his assertion with the fact that all Nobel prizes in the sciences were won by people from places where cocoa was eaten most in the world.

He said the practice could put impediments in the marketing of cocoa beans from the country, since consumers of the product across the world abhorred child labour.

"The COCOBOD does not support child labour; we will ensure that cocoa farmers do not engage in such practices,” he added.

He said with the implementation of the free senior high school policy, COCOBOD had decided to channel the funds used for cocoa scholarships into the construction of hostels in the universities to help provide accommodation for students, including the children of cocoa farmers.

At the Boaso MA Basic School, the Head Teacher, Mr Newton Gborgbor, appealed for the construction of a library and an Information and Communications Technology (ICT) centre for use by the pupils.

On employment, Mr Aidoo said last year, COCOBOD engaged 30,000 youth as hand pollinators to boost the yield of cocoa in the country, while 50,000 people were also employed to rehabilitate moribund cocoa farms.

He said 48,000 youth had also been engaged in the mass cocoa spraying exercise across the country, adding that in all, COCOBOD had a staff strength of 9,000.

"Besides the support the cocoa industry is providing for Ghana's economy, the number of people who are directly and indirectly benefiting from the cocoa industry makes the crop an important source of livelihood in the country," the CEO said.

Mr Aidoo thanked cocoa farmers for their significant contribution to Ghana's economy and gave an assurance that the government would continue to support the sector to enable cocoa farmers to enjoy the fruits of their labour.