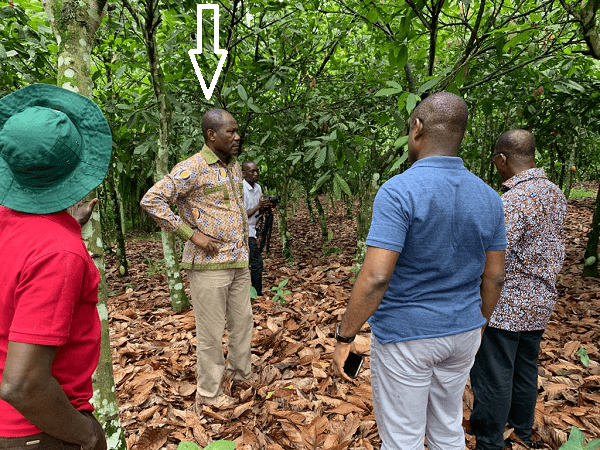 The Chief Executive Officer (CEO) of the Ghana Cocoa Board (COCOBOD), Mr Joseph Boahen Aidoo, has expressed concern over the wanton destruction of cocoa farms by illegal miners at Osino in the Fanteakwa South District in the Eastern Region.

Mr Aidoo experienced the destruction first-hand last week when he led a team from the board on a tour of cocoa farms in the area.

A press statement from the board said the CEO was “frightened” by the destruction that the illegal miners had caused to a cocoa farm which he saw during the tour.

It said the tour was to inspect progress of work on the ongoing mass pruning exercise, one of the initiatives under the COCOBOD’s Productivity Enhancement Programme (PEP).

During the tour, the CEO and his entourage came upon a cocoa farm that had fallen victim to the devastating activities of illegal miners, locally called galamsey operators.

According to the statement, when the team got to the site where the illegal activity was taking place, the illegal miners took to their heels in different directions, leaving behind their tools and machinery.

It added that the galamsey operators took refuge in surrounding bushes but far away from the view of the team from the COCOBOD.

It said Mr Aidoo and his team had earlier interacted with the executives and members of a cocoa-farmer cooperative at Osino, during which the farmers had complained about the activities of illegal miners in their community.

It said during the drive back, the team noticed a series of pits, starting from the edge of a farm along the road.

“The pits, which appeared to continue deep into the farm, were indicative of galamsey operations on the farm and that prompted the decision to stop to inspect that farm.

“The sizes of the pits were visibly bigger and more destructive as the team walked through the farm, until it came upon a vast clearing in the middle of the cocoa farm that has now become the site of a major galamsey operation,” it said.

“Here, the land was cratered with some of the largest mining pits, many soil layers into the ground. What used to be arable land was now a scene of devastation,” it said.

The statement said the CEO was “undoubtedly disturbed by what he just witnessed” and described the scene as a “very sad state of affairs that amounted to the destruction of the backbone of the economy”.

“You can see the way illegal miners — galamsey operators — have devastated not just the land but the cocoa farm which used to be here,” it said.

“These are clear saboteurs of Ghana,” he said.

The activities of galamsey operators are one of the major challenges faced by cocoa farmers and the cocoa industry at large.

The menace threatens to undo the investments made by the government to modernise cocoa farming and increase yields.

The Eastern Region — where the CEO witnessed the incident — and the Western, Western North and Ashanti regions are the worst affected by  illegal mining.

Mr Aidoo said it was disheartening that in spite of the charge by the President that people should desist from illegal mining, some recalcitrant citizens were bent on engaging in the menace.