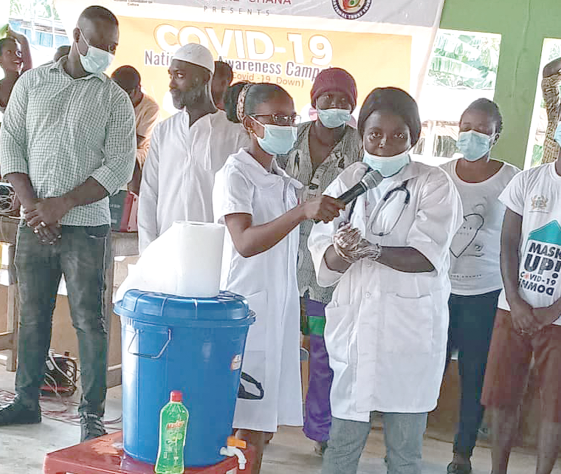 The Western Regional Office of the Centre for National Culture (CNC), with support from the Ghana Health Service (GHS) and the COVID-19 National Trust Fund, has embarked on a safety awareness campaign in the districts in the region to help curb the surge in cases of COVID-19.

The move is in line with the National Commission on Culture’s (NCC) bidding to use drama to educate local communities on ways to prevent the disease.

The sensitisation campaign, which began in December last year, had so far taken officials of the CNC to some of the disease hot spots, including Wassa East, Tarkwa Nsuaem and the Shama District.

The team also made stops in various towns where the people were educated on the mode of transmission of the disease and why it was essential that they abide by the safety protocols.

The Western Regional Director for the Centre for National Culture, Rev. Stephen Ebo Kessie, said the programme was well received in the Shama District since drama was one of the best ways of catching people’s attention.

“The Centre for National Culture in the region is using its rich understanding of society to educate them on good hygiene and to support the fight against the deadly COVID-19,” he said.

He said following the rise in cases, the centre considered the awareness campaign project as an opportunity to remind people that COVID-19 was real and that there was the possibility of a lockdown if care was not taken.

Rev. Kessie said the centre had so far worked in six towns in three districts and was willing to do more.

He said there was the notion in some quarters that COVID-19 was not real and that drinking locally brewed gin ((akpeteshie) could prevent the disease.

As a result of such fake information, people are getting infected, leading to an increase in fatalities which requires that preventive messages on the disease are reinforced to keep the public safe.

The Public Health Nurse in charge of the Shama District, Mrs Judith Naa Deide Okine, took the community members at Nyarkrom through the safety protocols on the disease and urged them to take their personal safety into their own hands.

“You need to know that COVID-19 is real. Fortunately, there is a vaccine on the horizon, but do not rush for any injections against the disease yet. When the time is right and we have it here in Ghana, the health service will let the public know,” she said.

She also encouraged the people not to stigmatise persons who had contracted the disease because it was no respector of persons and could attack anyone irrespective of one’s status in society.

The queenmother of Nyarkrom, Nana Akosua Gyamfiaba II, commended the Western Regional Centre for National Culture and the GHS for the initiative to sensitise the people to the disease.

She said she would also do her best to get the people continuously updated on the disease and encouraged them to make sure that they adhered to all the disease protocols.

The National COVID-19 Trust Fund had hitherto presented GH¢646,400 and a double-cabin pickup to the National Commission on Culture to enable it to undertake a programme to educate the public on the COVID-19 pandemic.

The Chairperson of the Board of Trustees of the fund, Justice Sophia Akuffo, said the trustees saw the need to extend support to the NCC because it was a body set up to maintain the unique cultural identity and values of the country.

She said the commission’s work was to promote an integrated national culture, as well as contribute to the economic development of the country.

"Re-tooling the commission is a sure way of equipping it with the needed logistics and equipment to enable it to reach out to various communities, especially those in the rural areas, with information to combat the disease,” Justice Akuffo said at the presentation ceremony in Accra.

In addition, she said the fund was in partnership with both public and private organisations, with the aim to increase efforts at fighting the disease.