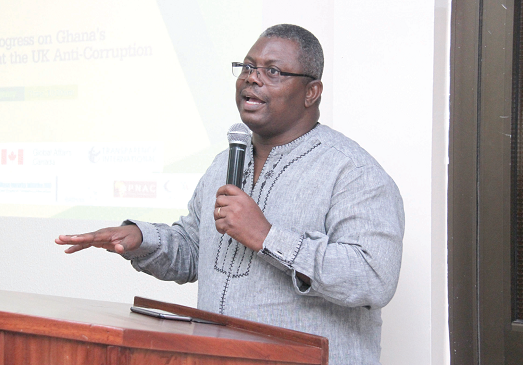 The Commission on Human Rights and Administrative Justice (CHRAJ) has identified 10 safe places in Accra where people suffering from or encountering stigmatisation or having tested positive for the coronavirus disease (COVID-19) could be offered support.

The safe places include the Hope Congregation of the Presbyterian Church of Ghana, the Upper Room Temple of the Assemblies of God, the Charismatic Evangelistic Church at Mamobi, the Wataniya Mosque, the Kardos Central Mosque and the Hajia Zelia Mosque at Nima.

The rest are the Ebenezer Society of the Methodist Church, Winners Chapel International at Madina, the Scraps Market Mosque and the Women Empowerment Foundation International at Agbogboloshie.

Speaking at an event to commemorate International Anti-Corruption Day in Accra last Wednesday, a Deputy Commissioner of CHRAJ, Mr Richard Quayson, explained that the places identified would serve as safe havens for people who needed support with the disease.

“These places will serve as havens for persons stigmatised because of the disease to call or walk in to receive counselling and other forms of psycho-social support from trained persons who will facilitate their full recovery and reintegration into society,” he said.

The World Anti-Corruption Day was organised by the Ghana Integrity Initiative (GII) and ought to have been marked last week Wednesday, December 9, but was rescheduled due to this year’s general election.

The International Anti-Corruption Day, slated for December 9, each year, is set aside by the United Nations Office on Drugs (UNODC) with the aim to raise awareness of the impact of corruption, as well as on ways to prevent and combat it.

The day is also marked to highlight the role of the United Nations Convention on Corruption.

Mr Quayson said as the country was transitioning from addressing the pandemic to focusing on recovery, there would continue to be a rise in violations against people’s integrity, which might undermine efforts at recovery, adding: “It is imperative that the fundamental safeguards for protecting people’s integrity are not weakened or compromised.”

According to him, at such times it was characteristic for attention to be turned on the public sector as though it was the only sector that engaged in corrupt practices.

He said such an attitude had made it difficult for the nation to make significant progress in fighting corruption.

Mr Quayson maintained that public sector corruption was inexcusable, and as such “it must be outrightly condemned by all. However, we cannot effectively fight corruption, which is endemic in our society, if we do not extend the effort to all sectors of our society.”

The Deputy Commissioner of CHRAJ said the national anti-corruption strategy and action plan that was built on inclusiveness sought to mobilise the efforts and resources of all stakeholders, including the government, individuals, civil society, the private sector and the media, to help prevent and fight corruption by promoting high level ethics and integrity and vigorous enforcement of the law.

“Unfortunately, all sectors in the country are paying lip service to the National Anti-Corruption Acton Plan (NACAP), while we turn around and squirm with impotent indignation at the ceaseless acts of corruption.

“If we had paid honest attention to the NACAP and implemented it with complete sincerity and commitment, this country would have been well prepared for COVID-19-related acts  of corruption,” he said.