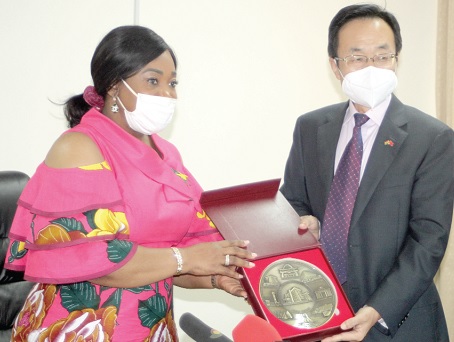 Ms Shirley Ayorkor Botchwey (left), Minister of Foreign Affairs and Regional Integration, presenting a gift to Mr Shi Ting Wang (right), the outgoing Chinese Ambassador to Ghana during a farewell call on the former at her office in Accra. Follow @Graphicgh

The Minister of Foreign Affairs and Regional Integration, Ms Shirley Ayorkor Botchwey, has commended the outgoing Chinese Ambassador to Ghana, Mr Shi Ting Wang, for his contribution to strengthening bilateral relations between Ghana and China.

“I want to commend you for the influential role you played in ensuring the approval of funds by the Chinese government for the construction of the ministry’s annex building,” Ms Botchwey added.

The minister gave the commendation when Mr Shi called on her last Friday to bid her farewell, after completing a two-year duty tour in the country.

She further praised the ambassador for the determination that accompanied his efforts to ensure the accelerated development of Ghana.

Ms Botchwey also expressed satisfaction with fruitful high-level visits and interactions and exchanges between the two countries, adding that such bilateral relations had led to China becoming Ghana’s largest trading partner and the seventh biggest trading partner of Africa.

She gave an assurance that the ministry would continue to collaborate and support his successor to ensure his or her successful duty tour.

For his part, Mr Shi thanked the government for its support and collaborations during his duty tour.

“I hold the most beautiful memory of Ghana. Although my term in Ghana was short, I was able to carry out my duty as an ambassador to Ghana because of the support I received. I enjoyed my life and work here,” he said.

“In the past two years, China has offered about 600 full scholarships and about 2,000 short-term training opportunities to Ghanaians. Currently, there are about 6,500 Ghanaian students studying in China and the total number of Ghanaian students ranks second in Africa,” he added.

The Chinese Envoy added that economic cooperation between the two countries was also fruitful, adding that China had rolled out a number of projects, including those at the University of Health and Allied Sciences in Ho and the James Town fishing port complex.

He further acknowledged China and Ghana’s efforts to support each other in the fight against the coronavirus disease (COVID-19) pandemic.