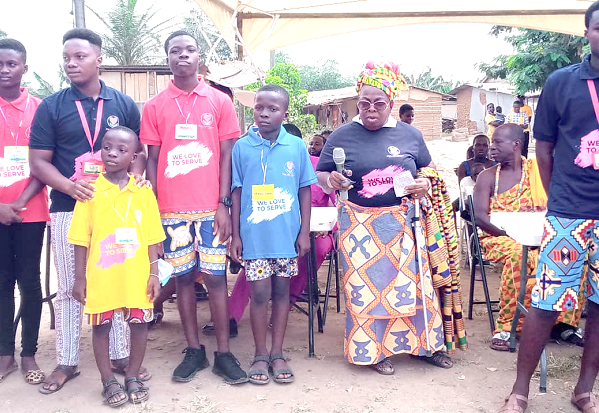 Madam Georgina Tweneboah Asa (2nd from right), mother of the Founder of the NGO, making a brief statement at the launch. With her are some children and their caretakers Follow @Graphicgh

A Ghanaian non-governmental organisation (NGO), Cool Friends Charitable Foundation, has been officially launched at Koko Junction, near Ampedwe in the Suhum Municipality of the Eastern Region.

The NGO, founded by Mr Charles Nana Amankwah Dickson, is dedicated to the welfare of needy children, less privileged adults and persons with disability.

Within the past years, the NGO had assisted such unfortunate persons in diverse ways such as feeding, clothing and the provision of wheel chairs.

At the launch ceremony at Koko Junction last Saturday which was attended by children, adults, as well as chiefs and queen mothers, the mother of the founder of the NGO, Madam Georgina Tweneboah Asa, said the aim of the NGO was to help and empower the underprivileged in society.

That, Madam Asa explained, would enable them to realise their potential and cater for themselves so that they would not be a burden to their families and society as a whole.

According to her, the underprivileged were very intelligent and needed support to unveil their talents as such, the foundation had decided to help them become useful citizens through education.

The Mmawhere Hemaa of Akuapem Ahwerease, Awoo Korkor, said since catering for the less privileged in society was a sacrificial job, all those interested in doing that must be patient.

The Mmawhere Hemaa, who has her own orphanage home at Nsawam, called for unity among charity organisations in the area in order to achieve the future dreams of the underprivileged, especially children.

She advised operators of orphanages not to be disturbed about negative remarks such as diversion of items meant for the homes which were not normally so.

The Mmarantehene of Koko Junction, Nana Kwasi Budu, said his outfit was highly excited about the foundation’s decision to assist underprivileged in the area which his outfit would support.

He appealed to the foundation to provide the community with a new mechanised water system to enable them to have potable water to drink since that had been their major problem.