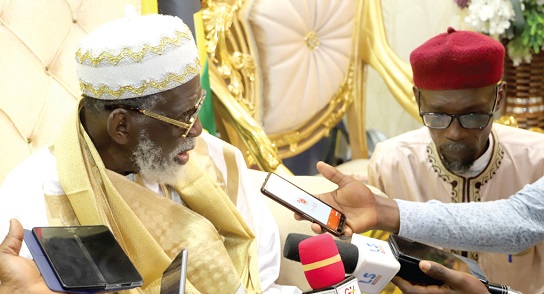 Sheikh Osmanu Nuhu Sharubutu, the National Chief Imam, speaking at the press conference in Accra. With him is Sheikh Armiyawo Shaibu (right) the Spokesperson of the Chief Imam. Picture: GABRIEL AHIABOR Follow @Graphicgh

The National Chief Imam, Sheikh Osmanu Nuhu Sharubutu, has advised the youth not to allow themselves to be used to cause violence in their communities, in the midst of rising cases of terrorism in the West African sub-region.

“Do not allow characters who would come to you in the cloak and gown of Muslim clerics to incite you into acts of extremism and violence,” he said.
Sheikh Sharubutu also called on Muslim clerics to educate their students in the “Makaranta” or Madrasas on the dangers of terrorists and terrorism.

“Muslim teachers must be careful in how they educate the populace, particularly students, in respect of messages and interpretations that engender or give rise to violent extremism and radicalism,” he added.

“We must join hands and maintain the harmonious relations between Muslims and Christians in order to make the space difficult or uncomfortable for any such elements that may want to enter our domain,” he added.

This was contained in an address read on behalf of the Chief Imam by his Spokesperson, Sheikh Armiyawo Shaibu, at a press conference in Accra on May 17, 2022.

It was in response to the security alert issued by the National Security Ministry to religious leaders to help curb any possible terrorist attacks in the country.

“We appreciate the value of being hospitable as Muslims. Our Prophet has taught us that whoever believes in Allah must honour his guest, and because of this, we open our doors wide for people to enter into our domains, sometimes without knowing the type of people they are.

“We are calling on all Muslim communities to be alert and look out for strange characters who enter into our communities and expose them,” the Chief Imam said.

He also urged the leadership in Muslim communities across the country to put stringent measures in place at their various places of worship, particularly the mosques, to prevent any possible terrorist attacks.

He called on clerics of all sects of Islam to map out strategies, including fixing closed-circuit cameras (CCTV) and the deployment of security personnel within and around their various places of worship.

“It is important for us to understand the importance of security arrangements; we must be in touch with security operatives to assist us on how to identify terrorists within our communities,” Sheikh Sharubutu added.

The Chief Imam associated himself with the statement issued by the National Security Ministry against “this kind of global threat to human life, peace and security”.

He further called on all Muslims in the country to contribute their quota towards ensuring that “we create a safe and secure space for us to survive and worship our God”.

He also urged them to deepen the existing collaboration with the leadership of Christian communities in their various areas to ensure harmonious co-existence.