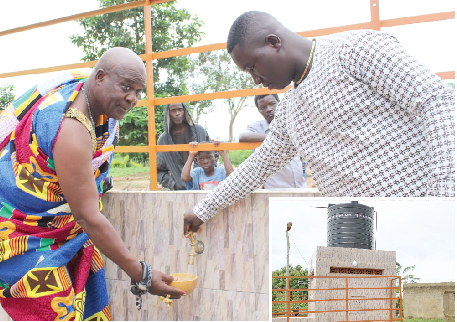 The Akyem Kotoku Mponua Gyasehene, Nana Kwesi Addo II, has built a mechanised borehole at Pankese in the Abirem North District in the Eastern Region to address the water challenge in the community.

The project, which was inaugurated last Tuesday, will serve over 2,000 residents who used to rely on streams for water.

Named after the late Queenmother of Mponuaman and Pankese, Nana Yaa Asantewaa I, the water project will be followed by series of similar projects in neighbouring communities facing similar water crisis.

Addressing journalists, Nana Addo said the water project had become necessary as the government could not be overburdened with the provision of all social amenities across the country.

"We cannot be over-reliant on the government, Members of Parliament or assembly members to help our subjects if we have the means as traditional authorities. This project is a symbol of love and service to my people and I believe it is a step in the right direction for all traditional authorities and individuals to pursue to make life comfortable for their people and leave a positive mark on their communities," he said.

He said the project would be the lead project of at least 20 similar water projects to be established in other communities such as "Anobra, Awobra, Benkrom, Adukrom, Kotiyeaboa, Twenyimnyansa, and Hwuayemorbor" which have been experiencing similar challenges.

He added that as a project which belonged to the community, the responsibility to maintain the project also lay on the community, hence a fee of 10 pesewas would be charged at the site to fund the maintenance of the project.

The project has a 10,000-litre water tank for storage, with six pipes connected to it to serve multiple residents at a time.

In an interview with the Daily Graphic, the Akyem Kotoku Mponua Pankese Dabehene, Nana Kwesi Braku, said community members had been relying on the Kyekyeresu River, which is over two kilometres away from Pankese Awoyo where the new water station was located.

The residents, according to him, had been crossing the main New Abirem Road to fetch water from the river to do their chores and other work, a situation he described as worrying, especially for children of school age who were usually affected academically.

The new water system, he said, would address the situation which also threatened the life of children who usually crossed the busy road just to fetch from the Kyekyeresu river.

The Unit Committee Chairman of Pankese, Mr. Mark Agyakoo, expressed gratitude to the Akyem Kotoku Mponua Gyasehene, Nana Addo, stressing that the project was timely and met the primary need of the community.

He said the lack of potable water in the community had been a burden on residents, as it affected academic activities among students in the community, who after fetching water from a distance of two kilometres, had to trek close to an hour to school in another town.