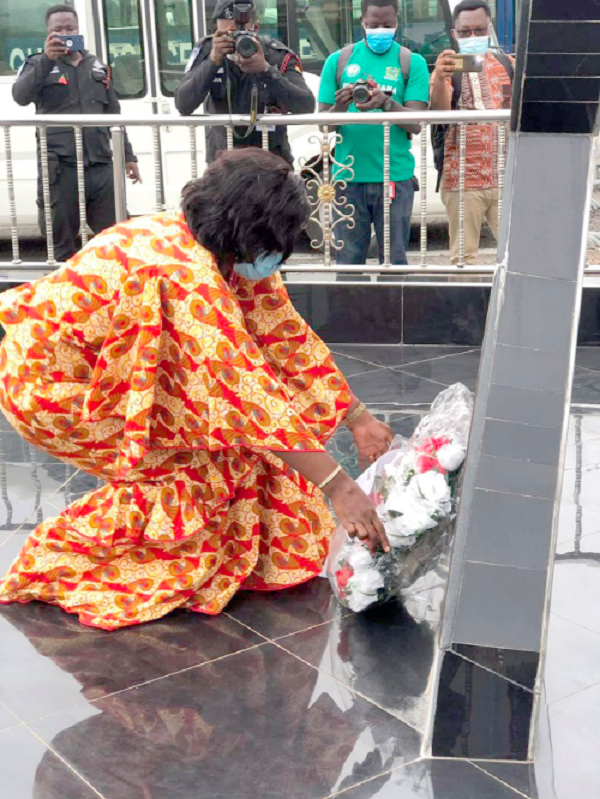 The Central and Ashanti Regional police commands have held separate memorials in the respective regional capitals in honour of personnel who died in the line of duty, especially over the past year.

At Cape Coast, four policemen were remembered with a parade, while a memorial service was held for six who died in the line of duty in the Ashanti Region.

In Kumasi, six police personnel including two police women who died in the line of duty during the period under review were remembered.

Three of them were killed by armed robbers, while one drowned in a stream during an operation, one during an accident and the other while returning from work.

At the Cape Coast event last Tuesday, DCOP Tabi appealed to the public to cooperate with the police in reducing crime, adding that the limited number of police personnel required civilians supported the polices efforts for safer communities.

"Our job is risky but we are committed to work even harder to protect lives and property but we are human beings too and few and cannot do it alone," he said.

He said the command would intensify crime combat by improving visibility and patrols in the community.

DCOP Tabi pledged a renewed commitment by the command to combat crime in the region and to protect lives and property.

He further appealed for logistical support and cooperation from civilians and organisations to help the command ensure effective policing.

DCOP Tabi delivering his remarks to mark the day

Delivering a sermon at the Ashanti Regional Police Command Memorial Day ceremony last Wednesday, the Ashanti Regional Chaplain of the Ghana Police, Chief Superintendent Very Reverend Jonas S. Aboagye, charged his fellow police officers to be guided by the fact that they would account for their stewardship on earth to their maker.

He asked them, therefore, to be guided by the “principle that we are living an earthly life and an eternal life beyond this earth,” asking, “When you die, where will you be?”

He charged the police personnel to be faithful in their work and encouraged them to be careful and conscious of their life “bearing in mind that service to man is service to God.”

“In our work whether investigations, guard duties, operations of all kinds, in my work as a chaplain, and in whatever position we function in the police service, let’s bear in mind that we are serving man and we are serving God,” he urged.

Very Rev. Aboagye further asked his colleagues not to despair by the death of their colleagues but to resolve to work harder for God and mankind.

While he admitted that it was becoming worrisome that the service was losing its personnel in the line of duty, he said such things should be expected and enjoined the personnel to continue to give their best in their duties.