Celebrating our farmers- Beyond the Farmers Day celebration 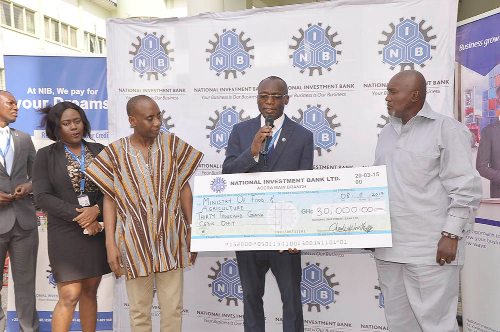 An official of the National Investment Bank (right) making a donation to Dr Sagre, a Deputy Minister of Food and Agriculture, towards this year’s Farmers Day celebration Follow @Graphicgh

Come tomorrow, December 1, a new king will be crowned when farmers, fishers and other players in the agricultural industry gather at the Heroes Park near the Baba Yara Sports Stadium in Kumasi in the Ashanti Region to celebrate excellence in the sector.

The annual celebration, which will be marked on the theme: “Farming for Food and Jobs,” will see a number of farmers and fishers receiving national awards for the sweat and toil they go through to put food on the tables of many a Ghanaian.

Their compatriots in the regions will also be celebrated for blazing the trail and breaking their backs to feed the country.

All roads will also lead to the 216 metropolitan, municipal and district assemblies (MMDAs) across the country where other farmers and fishers will be honoured for doing a yeoman’s job in the oldest of all occupations in the world.

The National Farmers Day, which is marked on the first Friday in December every year, was instituted by the Provisional National Defence Council (PNDC) government in 1985 in recognition of the vital role farmers and fishermen played in the economy.

The initiative was to honour farmers and fishers for the pivotal role they played to bring the economy back on its feet in the aftermath of devastating misfortune that hit the sector from 1982 to 1983.

The first National Farmers Day was celebrated on Friday, December 6, 1985 at Osino in the Eastern Region. Since then, the event has rotated around the 10 regions to engage other regions to be part of this big event.

From a humble beginning of a machete, a pair of Wellington boots and a transistor radio as the award for the National Best Farmer, the award scheme has tremendously improved over the years.

After emerging the overall best farmer for 2016, for instance, 42-year-old Robert Crentsil from the Ejumako-Enyan-Essiam District in the Central Region was presented with a dummy key to a three-bedroom house valued at $100,000, to be constructed by the Agricultural Development Bank (ADB).

This development underscores the extent to which governments over the years have increasingly set great store by the National Farmers Day.

This year’s event promises to be more juicy, judging from the grand style by which the event was launched and the donations that have poured in from corporate Ghana.

Some entities that have made donations include Interplast Limited, the Ghana Reinsurance Company Limited and the Ghana Revenue Authority which donated GH¢30,000, GH¢25,000 and GH¢20,000 respectively.

Inasmuch as this effort by the government and corporate Ghana to butter the bread of farmers is commendable, it is more important to have a paradigm shift from giving farmers and fishers fish to teaching them how to fish.

In many parts of the country, especially in the rural areas, farmers still rely heavily on crude farming practices such as the slash and burn, felling and burning of trees, use of hoe and machete, and other labour- intensive practices.

In spite of the advent of modern technologies, most farmers in the rural areas are still unable to increase their production capacity and productivity because of the lack of access to these innovations in the agricultural sector.

However, a research conducted by SEND-Ghana, a non-governmental organisation (NGO), and the Peasant Farmers Association of Ghana (PFAG) in 2016 puts the figure at one AEA to 3,000 farmers.

The research showed that the situation has been compounded by the lack of the right combination of logistics such as motorbikes, computers and information for the few AEOs to discharge their duties effectively.

The lack of AEOs has negatively impacted on agricultural productivity because it has contributed to poor agronomic practices, post-harvest management challenges, inefficient use of inputs and abuse of pesticides.

In a recent interview on the prospects of the Planting for Food and Jobs (PFJ) policy, the Minister of Food and Agriculture, Dr Owusu Afriyie Akoto, said a total of 1,200 AEOs trained by the country's agriculture colleges had been recruited and posted to 187 districts across the 10 regions to provide extension services to farmers.

The National Service Scheme (NSS) supplemented the efforts of MOFA by posting 2,160 prospective personnel to provide agriculture extension services to farmers in support of the PFJ policy.

These are good initiatives to reduce the gap between AEOs and farmers, but like the proverbial Oliver Twist, more needs to be done in that direction.

Under the government’s PFJ policy, more than 20,000 farmers have been supplied with fertiliser at 50 per cent subsidy and given other forms of technical support.

The ambitious policy needs to be strengthened and scaled up to cover more of the farmers if the country is to achieve food security and eliminate poverty among the rural population.

Fishermen continue to use crude methods in trapping fish, a situation that has greatly contributed to the dwindling fortunes of the fishing industry.

There are more than two million fishermen, fish processors and other stakeholders in the fisheries sector who, together with their dependents, constitute 10 per cent of the national population.

The dwindling fortunes of this sector imply that the livelihood of this significant percentage of the population will be affected adversely if key steps are not taken to reverse the trend.

Currently, the poultry sector is bleeding profusely with the importation of chicken, leaving the local industry gasping for breath.

Factors such as increased urbanisation, population growth, as well as increasing per capita income of the urban population have led to an increased demand for meat, with chicken as the preferred choice.

However, the excess demand over supply of chicken has led to more than 80 per cent of the chicken being imported. The situation is having a negative toll on the local poultry industry.

The nagging issue of destruction of farmlands and farm produce by Fulani herdsmen is still a big scar on the agricultural sector that needs to be nursed.

It is in the light of the above that efforts at celebrating farmers ought to move from merely presenting gifts to them to investing in building the capacity of the farmers and fishers.

The PFJ policy ought to take into account the myriad of challenges farmers and fishers face and comprehensively address them.

In the meantime, our farmers and fishers deserve a standing ovation as we all look forward to December 1.