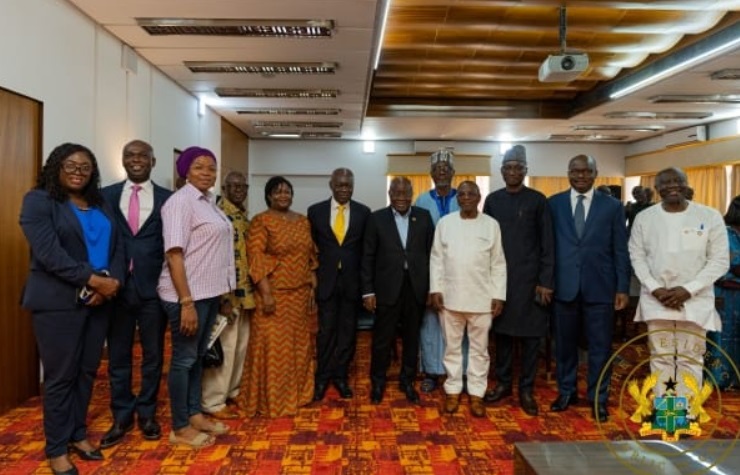 The Forex Bureau Association of Ghana has disclosed that the exchange rates have reacted positively, with an appreciation of the Cedi, following ongoing engagements between the government and key stakeholders.

According to the President of the Forex Bureau Association of Ghana, K. T. Dadzie, whilst it has not been easy for Forex Operators, their customers and the nation, during these past three months of forex turbulence, the cedi, since the government’s direct interventions, has appreciated significantly against the dollar.

He said, this means that the situation with the rates spiralling out of control is not in any way a natural course of action, but the deliberate efforts of “people speculating and trying to make rainfall out of the situation that we are in.”

Mr. K.T Dadzie made this known when the leadership and members of the Association met the President of the Republic, Nana Addo Dankwa Akufo-Addo, in an extended version of continuing engagements between the Association and the Bank of Ghana, to discuss the concerning behaviour and turbulence of the foreign exchange market.

According to President Akufo-Addo, at whose behest the meeting was occasioned, “the state of our currency and the turbulence in our foreign exchange market is a matter of notoriety now in Ghana and it’s a matter of very grave concern.”

He said, “the initial import for the creation of Forex Bureaus was at the time when the economy was opening up and liberalizing. So we had these Forex Bureaus, regulated by the Bank of Ghana; but which will make access to foreign exchange in a regulated and controlled manner easier.”


“This was necessary to curb the and trying to find a mechanism for putting an end to Black-Market operations in our currency,” he added.

“Unfortunately, somehow,” he continued, “these initial motivations for the Forex Bureau have still not materialized. The Black Market; you will hear public commentators, and the Bank of Ghana itself, that it is still driving both the supply as well as the rate of our foreign exchange transactions.”

The Forex Bureau Association pledged their commitment to support the government towards stabilizing the rates and reducing drastically the influence of Black-Market activities within that space.