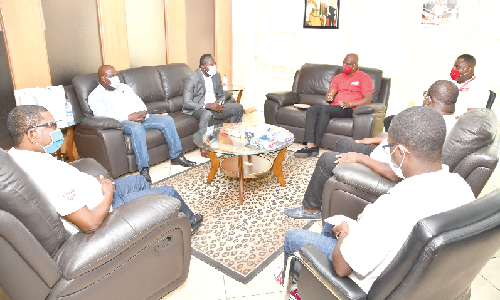 Mr Ato Afful (in red top), MD of the Graphic Communications Group Limited, having discussions with the delegation from Casa De Ropa in his office during the visit. They are Mr Ebenezer Obeng-Baffoe and Mr Anthony Dawson Amoah, CEO and Executive Director of Casa De Ropa, respectively

According to the management of the company, it was currently piloting the programme with seven national service persons and it intended to roll it out fully by next year, after the company had measured the success of the model.

The Executive Director of the company, Mr Anthony Dawson-Amoah, disclosed this in an interview after a two-man delegation from the company had paid a courtesy call on the Managing Director of the Graphic Communications Group Limited (GCGL), Mr Ato Afful, and the leadership of the media house in Accra last Friday.

“For now, we want to start with the national service persons and measure the success before rolling it out on a large scale by next year. We also intend implementing an outgrower system where Ghanaians who are interested in agriculture will be assisted with our products. This is an alternative source of livelihood for women especially, who form the core of our workforce,” Mr Dawson-Amoah said.

The team was at the Head Office of the GCGL to familiarise themselves with the operations of the group and also express their appreciation for the support it had received from the GCGL over the period.

Present at the meeting were the Editor of the Daily Graphic, Mr Kobby Asmah; the Editor of the Graphic Business, Mr Theophilus Yartey; the Director, Marketing and Sales of the GCGL, Mr Franklin Sowa, and Mrs Kyerewaa Asiamah Wiafe of the Corporate Communications Unit.

Located at Gomoa Bewadze in the Central Region, Casa De Ropa is an agribusiness company under the government’s One-district, One-factory initiative and specialises in the production and processing of sweet potatoes.

It processes orange-fleshed sweet potato into puree, which is further processed into biscuit, bread, potato rolls and burger, pizza, crisps and chips and other pastry products without adding sugar.

With the use of improved production technology, the company also produces sweet potato flour for preparing household meals.

It has constructed three dams on its farm site to irrigate the farm for all-year-round production, and as part of its deliberate policy to empower women, about 80 per cent of its workforce are women.

To make its operations and products visible and accessible to Ghanaians, Mr Obeng-Baffoe said, the company had started selling its pastries on the market and already established a restaurant on the campus of the University of Cape Coast (UCC), where it sold affordable products to the university community.

The CEO added that there were plans to do same on the campuses of other tertiary institutions in the country.

“Potato is now becoming a cash crop. There are a lot of benefits from this crop and we have to take advantage of the numerous opportunities it offers.

“That is why we are bringing the youth on board to train them to be able to access all the benefits from the sweet potato value chain,” he said.

He added that the company wanted to become the number one food distributor in the country.

Mr Obeng-Baffoe also indicated that there were plans to partner the GCGL to leverage its courier, print and packaging services.

Mr Afful lauded the management of Casa De Ropa for the initiative and said the GCGL was ready to partner it to succeed.

“As a state-owned media, the GCGL is obliged to support any national project to succeed. We see this as such. We believe that with the commitment of the team, we can, in our own small way, make Ghana proud,” he said.

He said he was impressed by the operations of Casa de Ropa and gave an assurance that some arrangement would be made for some staff of the GCGL to pay a visit to the farm and the factory sites to apprise themselves of Casa de Ropa’s operations.

For his part, Mr Asmah emphasised the need for Casa De Ropa’s story to be told forcefully, adding: “We are encouraged by what you are doing and we will tell your stories as they unfold.”

“We have the biggest platform to offer you all the needed support and so we must quickly begin to work in order to open bigger opportunities for you,” he added.