500 Workers to lose jobs after cancellation of oil, gas contracts 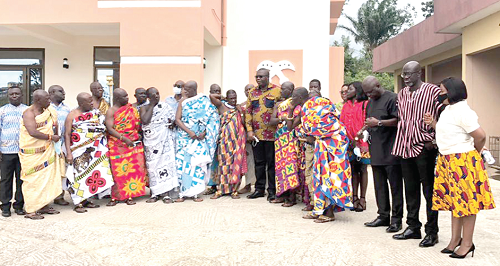 Ninety-eight upstream oil and gas contracts, valued at $389 million, have been cancelled due to the outbreak of the coronavirus disease (COVID-19).

Contracts awarded by Aker Energy, AGM, Eni, GOSCO and Springfield between the fourth quarter of last year and the first quarter of this year were affected. As a result, a minimum of 500 Ghanaians will lose their jobs.

“The cancellation of these contracts such as a five-year Maersk Drilling contract, which was terminated in June 2020 together with associated sub-contracts will have a devastating toll on local businesses,” the Chief Executive Officer of the Petroleum Commission, Mr Egbert Faibille Jnr, has said.

He was speaking at a meeting with the Western Regional House of Chiefs in Takoradi.

The meeting, the sixth in the series, is used as a platform to engage chiefs in the area to address their challenges and expectations while providing them with some updates on the sector.

Mr Faibille said contractors and sub-contractors laid off more than 100 temporary and permanent workers, while more than 450 potential direct and indirect temporary jobs and opportunities were also lost due to the suspension of drilling by international oil companies such as Amni, GOSCO, Eni and Eco Atlantic.

He said in the offshore sector, the lead operator of the Jubilee and Tweneboa, Enyera and Ntomme (TEN) field also reduced staff drastically while 50 per cent of them were on rotation, a shift system for people who worked on oil rigs and production platforms.

The companies also reduced by 56 per cent personnel onboard production platform, FPSO Kwame Nkrumah, and those on board FPSO John Evans Atta Mills by 52 per cent.

The operator of the Sankofa field, Eni Ghana, further reduced personnel on board FPSO John Agyekum Kufuor by 52 per cent, while the number of workers at its onshore reception centre (ORF) at Sanzule in the Ellembelle District were also reduced by 46 per cent.

Mr Faibille said the industry had suffered significant shocks which did not only affect the economy and businesses, but also impacted on work obligations and operations.

“The shortfall in revenue in the upstream sector this year is very significant, making companies invest heavily to enable staff to work remotely to keep the industry running,” he said.

Mr Faibille said aside from the layouts, the COVID-19 pandemic was likely to delay the country’s second round of licensing blocks.

“In the pre-COVID-19 period, the industry made considerable investment in infrastructure, personnel and technologies in anticipation of participation in major projects.

“The consequential effect of the cancellation of contracts amid the already reduced workforce in the industry resulted in the layoffs of both expatriate and local personnel,” he said.

The commission later donated hygiene products, including liquid soap and face masks to the chiefs.

The President of the House, who is also the Paramount Chief of the Wassa Amenfi Traditional Area, Tetrete Okuamoah Sekyim II, commended the commission and pledged that the items would be put to good use.

He expressed appreciation for the regular interactions and called for more of such engagements between members of the house and the commission to ensure the people were well informed about the activities of the latter in the region.