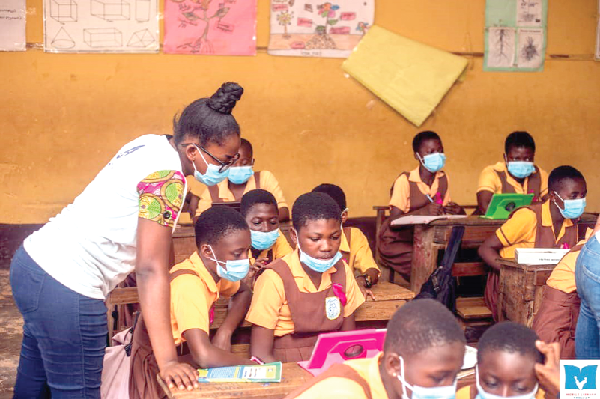 A project that seeks to address school attendance and quality of education facing pupils in upper primary and junior high schools (JHS) has ended in some selected rural communities in the country through a Mobile Learning Lab (MLL) project.

The one-year project, dubbed “Young women leading the use of Mobile Learning Labs in Ghana”, was undertaken by CAMFED Ghana with funding from the 60 Million Girls Fund, a Montreal-based public foundation dedicated to girls´ education in developing countries.

The project was implemented by members of CAMFED's alumnae association (CAMA), who served as coordinators.

As part of the project, 20 female teachers and education entrepreneurs (edupreneurs) were trained and mentored as MLL coordinators in charge of implementing the technology in rural schools.

Users can access these audio-visual multimedia content via wireless enabled devices without the use of the internet.

The sessions were structured in a way to address knowledge gaps in traditional subjects such as Maths, Science, Information and Communication Technology (ICT) while teasing out students interest in other topics.

The project at the end, helped to expand students teamwork and leadership skills while building their confidence, and also incorporate presentation skills in the learning sessions.

At a stakeholder sustainability meeting among head teachers and MLL coordinators from the Central Region held in Accra, the National Director of CAMFED Ghana, Ms Sally Ofori-Yeboah, said the project was aimed at developing the interest of girls in traditional subjects such as mathematics, science and ICT through the delivery of quality learning materials in a way that was interesting to students.

Ms Ofori-Yeboah added that the project also aimed at increasing the prominence of young women in their communities by giving them the opportunity to take the lead in bringing technology into their rural schools.

Giving out some of the preliminary findings of the project, the Research and Learning Senior Officer, CAMFED Ghana, Mr Patrick Atta Buabeng, said in all, 37 JHS across the country were targeted in some rural communities with 4,600 pupils.

He said the pupils had a total of 704 sessions, which helped to boost school attendance by 90 per cent and a total of 65 per cent of the pupils by the end of the project were able to use the tablets, which were being used for the teachings, unassisted.

In the Central Region, he said a total of 12 JHS were involved with 1,377 pupils benefitting from a total of 248 sessions.

The project, he said, boosted school attendance by 87 per cent among the pupils.

Giving out some of the emerging issues after the project, Mr Buabeng said through the project, it became evidently clear that E-learning methods made learning easier for learners and increased learners’ enthusiasm to acquire more knowledge.

Also through the sessions, he said it was identified that E-learning approaches promoted child-centred teaching and learning.