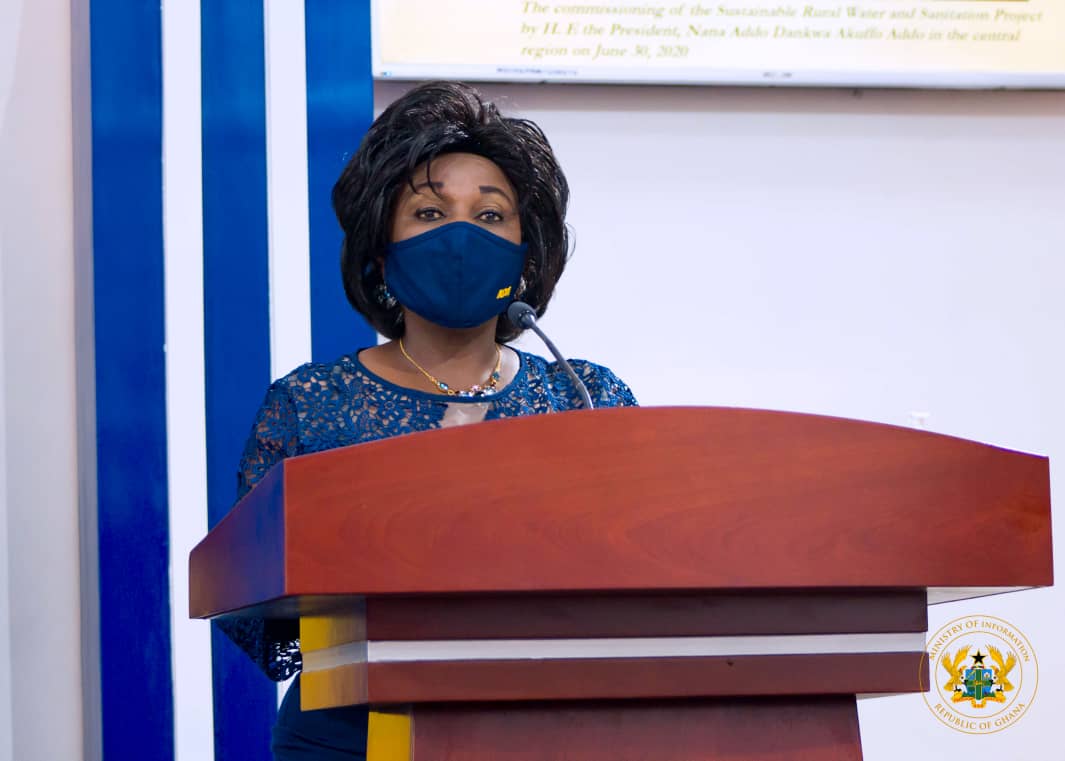 The Minister of Sanitation and Water Resources, Ms Cecilia Abena Dapaah has said cabinet has given approval for the start of the Phase 3 of the Five Districts Water Supply Scheme also known as the STRABAG Project, which is designed to provide water to 183 communities and about 222,075 people in the Central Tongu, North Tongu, Ho West, Adaklu and Agortime Ziope Districts.

Addressing the Meet the Press series in Accra Wednesday morning, Ms Dapaah said the project concept is in four (4) phases, from feasibility to design and construction.

“Upon completion of phase 1 and 2, Parliament approved a loan facility of €11.5million in April, 2020, to be financed by Raiffeisenbank International of AG/Vienna, for the implementation of the Phase 3. The scope includes the completion of the distribution network in areas which are already connected by transmission mains, with drinking water treatment plant constructed under phase 1&2; and connection of Waya to Kutime by transmission mains, with 3 water towers and a distribution network along the transmission main.”

Ms Dapaah announced that the Sustainable Rural Water and Sanitation Project which started in January 2018, ended on June 30, 2020. She said, in all, 23 water Systems were provided in 164 Communities within 11 Regions namely; Upper West, Upper East, Northern, Savannah, North East, Central, Western, Western North, Bono, Ahafo and Bono East Regions. In addition, 250 Boreholes were constructed in the Upper West region. She said the total population served by the project is approximately 325,000.

“I am happy to announce that, H. E. the President of the Republic, Nana Addo Dankwa Akufo-Addo on Tuesday, June 30, 2020, symbolically commissioned all the Water Systems, at two separate ceremonies at Amasamkrom in the Mfantseman Municipality and Jei-Krodua in the Awutu Senya District, all in the Central Region.
It is worthy to note that, 184,000 people in 146 Communities in the Central Region are benefitting from the Project, and this has increased water coverage for the region from 63.8% to 70.04%. A massive 6.24% in just 3 years.”

The Minister further announced that the Rural Communities and Small Towns Water Supply Project (RCSTWSP) otherwise known as the Aqua Africa Project is being undertaken by the Ministry through the Community Water and Sanitation Agency. She said the project will construct 150-point sources and 12 Small Town Water Systems to serve 588 communities across 5 regions, namely Volta, Oti, Greater Accra, Ashanti and Eastern. The project when completed will benefit about 282,000 people.

“The Project Implementation Manual for this project has been developed and the value for money assessment is on-going. Sod cutting will be performed for the take-off of the project by the end of this month, July, 2020.”

The Sanitation and Water Resources Minister said under the Government Borehole Programme, the Ministry is undertaking the construction of 654 boreholes across the country.
“Currently, 433 out of the 654 boreholes have been drilled and the accompanying pads constructed. The Ministry has also procured pumps to be installed on these boreholes. The programme when completed will benefit about 220,000 people,” he said.