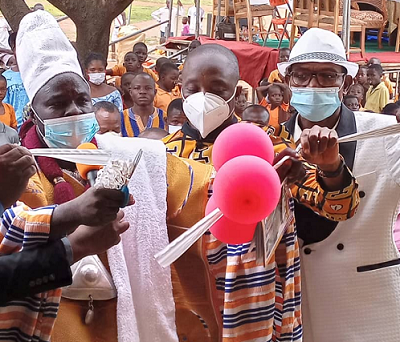 An entrepreneur, Mr Godwin K. M. Binlinla, has built a multi-purpose school block from his personal resources for the Kpassa Basic School "A" cluster of schools in the Nkwanta North District of the Oti Region.

The facility, which has been connected to electricity, also comes with a mechanised borehole to supply water to the school.

Ubor Tassan Konja VI and other dignitaries unveiling the plaque of the building.

The keys to the building were handed over to the management of the cluster of schools at the inauguration ceremony performed by the Paramount Chief of Kpassa, Ubor Konja Tassan VI, last Friday.

Mr Binlinla, who is the Chief Executive Officer (CEO) of WBI Multi-credit Housing and Construction Company, said the building was in honour of his late father, who was a founding member of the school.

He explained, however, that the gesture was in response to an appeal to him to help address the accommodation challenges facing the cluster of schools.

The four schools in the cluster — Junior High School (JHS) A1, JHS A2, Primary A1 and Primary A2 — have a population of 1,750, far more than the school could accommodate.

Indeed, some classes had lessons under trees, while others operated in a dilapidated structure.

Mr Binlinla called for collaboration among the traditional authorities in the district, the district assembly and other stakeholders to address challenges confronting education in the area.

"Nobody can develop our district better for us. It is us who must rise up, forget about partisan politics, and work together to solve our common problems," he said.

The regional minister commended Mr Binlinla for investing in the educational infrastructure for the younger generation.

He observed that the gesture was a good example of the private sector partnering the government to deliver quality education to all Ghanaian children.

The paramount chief also commended Mr Binlinla for his magnanimity to the society.

"We know that it is the government that builds schools and undertakes big projects like this. It has never happened in this district that an individual will put up such a big project for a school. We are grateful to him," he said.