Bring forth children you can take care of - Okyenhene advises parents 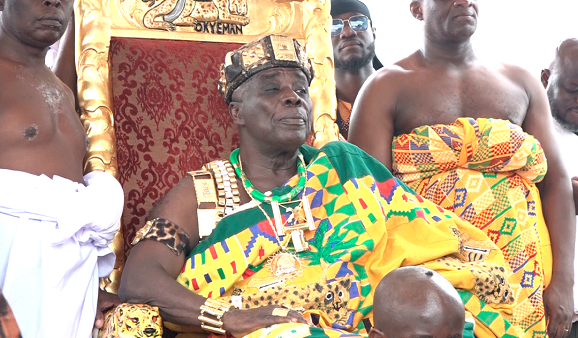 The Okyenhene, Osagyefuo Amoatia Ofori Panin, has advised parents and guardians, especially fathers, to bring forth the number of children they can take care of.

He said it was unfortunate that some fathers brought forth about seven children without being able to feed, clothe and educate them to grow up as useful citizens in society.

Some women, the Okyenhene intimated, must also be blamed for many children not being catered for because they continued to follow particular men who could not care for children they had with them.

Osagyefuo Amoatia Ofori Panin further condemned men who impregnated teenagers as a result of which such girls could not continue with their education.
The Okyenhene made the remarks when he addressed a grand durbar of the chiefs and people of Akyem Abuakwa to climax their annual Ohum Festival at Kyebi last Saturday.

The Okyenhene said it was sad for parents, particularly, men to father many children knowing that they would not be able to feed, shelter or clothe them let alone educate them.

In such a situation, he said such unfortunate children were left on their own as a result of which they became a nuisance to society.

According to Osagyefuo Amoatia Ofori Panin, if such children were properly cared for, they would be able to grow up as useful citizens.

On teenage pregnancy, the Okyenhene chastised men who impregnated teenagers especially schoolgirls and asked such men to put a stop to it.

He however advised the teenage schoolgirls to concentrate on their studies instead of following men since those men would not be able to do anything better for them but rather destroy their future.

Speaking generally on education, the Okyenhene indicated that it was the responsibility of every teacher to ensure that their pupils or students performed well in every examination.

Teachers, he said, must also be adequately rewarded to encourage them to put in their best in the classroom to enable the students or pupils to perform credibly at examinations.

"A teacher whose entire pupils or students of about 45 fail in an examination is a bad teacher” he said.