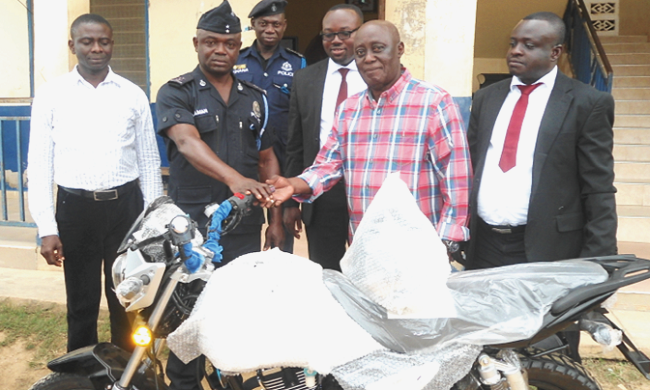 The bank also made a cash donation to the organisers of the Opemsuo Festival in the Kokofu Traditional Area. It further provided roofing sheets for the Offe Okogyeasuo Basic School at Kokofu.

According to the General Manager of the bank, Mr Francis Agyei Bekoe, the presentation was in response to a request the police command made to his outfit to boost their crime fighting activities within the district.

“The board of directors of the bank, knowing the benefits derived from doing banking in a secure environment, assessed and approved the request,” he indicated.

The Chairman of the Board of Directors of the bank, Mr Philip Edward Kwabena Antwi, who made the presentation, said it was in line with the corporate social responsiblity of the bank to support establishments in its operational areas to ensure safety and also promote development activities for the benefit of the people.

The District Police Commander, ASP Asiamah Amponsah, expressed appreciation to their benefactors for the motorbikes.

According to him, they would help his men respond quickly to combat crime and also ensure the maintenace of law and order in the area.