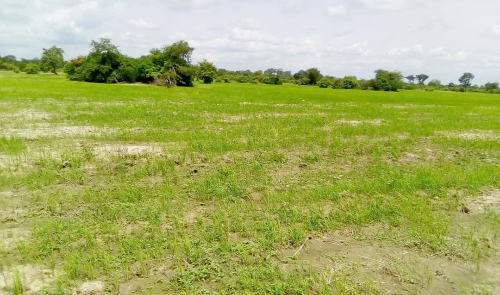 A rice field in the Bono East Region

The Bono East Region, which is part of the six regions created in 2019, is considered a food production hub of the country, with its capital, Techiman, recognised as one of the biggest food markets in the West African sub-region.

What has not been explored, however, is the region’s massive potential for rice production as eight out of the 11 districts and municipalities have conditions suitable for the cultivation of the crop to reduce Ghana’s soaring rice imports.

Indeed, if the favourable weather conditions and availability of rice valleys is complemented with political will, the Bono East Region can place itself at the position to rescue Ghana from its dependence on the importation of a greater proportion of its rice needs.

The region has about 32,236 hectares of rice valleys supported by agro-ecological conditions suitable for commercial rice production. If fully developed, the region can produce about 161,000 tonnes of rice annually to reduce rice importation.

The Pru East District has the largest rice valley in the region with 11,063 hectares, followed by the Kintampo North and Pru West districts with 10,532 and 4,770 hectares respectively.

The commercial production of rice and all related value chain activities in the region is estimated to provide about 3,000 direct jobs to the youth in areas such as commercial and smallholder rice production, rice milling and service provisions, including input supplies, machinery and marketing.

During the recent working visit by the Minister of Food and Agriculture, Dr Owusu Afriyie Akoto, to the region and the subsequent one by President Nana Addo Dankwa Akufo-Addo, the Bono East Regional Minister, Mr Kwasi Adu-Gyan, reiterated his commitment to turn Bono East into the rice production capital of Ghana.
Both Dr Akoto and President Akufo-Addo were enthused by Mr Adu-Gyan’s vision and commitment to make the region a rice production hub in the country.

“I am committed not only to help the President to reduce rice imports but also to open up avenues for employment for the teeming unemployed youth through commercial rice production, milling, packaging and the development of off-taker agreements for ready market.

"We are determined to make the production of rice very attractive to entice the youth to move to that sector to create employment for themselves and others," Mr Adu-Gyan stated.

A business development and agro-industrialisation committee, according to the minister, had been put in place to develop appropriate concepts and models for commercial rice production and other similar projects, with emphasis on youth employment and entrepreneurship.

Ghana’s high rice imports which reached 950,000 tonnes in 2020, has been a long-standing concern. However, in that same year, a total of 8,388 hectares out of the over 32,000 hectares of rice valleys were cultivated by smallholder farmers in the Bono East Region and 31,200 metric tonnes of rice was produced.

Agriculture experts in the region have predicted that the current output of four metric tonnes per hectare could be increased if the necessary inputs were made available.