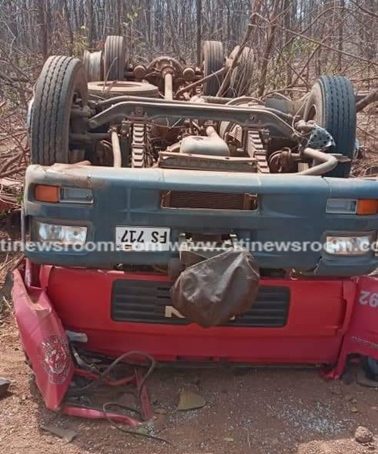 One person has been confirmed dead while four others are in critical condition following an accident involving a motorcycle and a fire tender on the Kwame Danso-Atebubu road in the Bono East Region.

The deceased is said to be the pillion rider of the motorcycle.

The accident occurred Tuesday at about 10:40 am when the motorbike rider crossed the fire tender which was responding to a distress fire call.

According to the Atebubu-Amantin Divisional Police commander, ACP Samuel Alordey, the fire tender was responding to a distress fire call at a hospital.

He said “on the way coming to the hospital where the fire alarm was sounded, they got involved in an accident.

“The car knocked down a motor rider with a pillion rider. The pillion rider died. The car summersaulted several times and landed upside down. It is damaged beyond repairs.”

Three of the fire officers were referred to the Techiman Holy Family Hospital.

Another crew member is said to be responding well to treatment at the Atebubu Government Hospital.

A statement released by the Ghana National Fire Service said the Chief Fire Officer was deeply saddened by the incident and gave assurances of giving the victims the best medical attention.

It added that the Ghana National Fire Service Council and the Interior Minister had put in place plans to airlift the affected fire fighters to Accra for further medical attention.