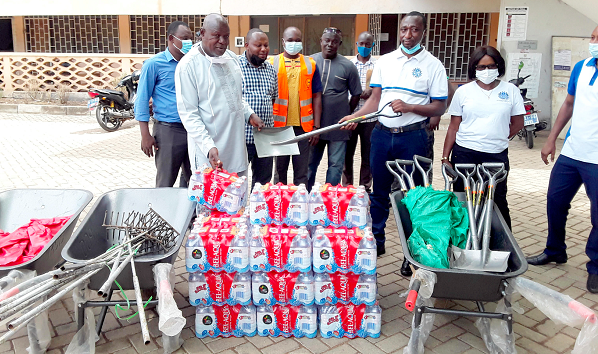 The Bolgatanga branch of the National Investment Bank (NIB) in the Upper East Region, has donated some sanitation equipment to the Bolgatanga Municipal Assembly to be used for clean-up exercises in the area.

The gesture, which formed part of the corporate social responsibility (CSR) of the bank, is to help enhance cleanliness in the municipality.

It is the latest benevolent gesture by the company, which also donated GH¢5,000 cash to the Regional Secretariat of the National Disaster Management Organisation last year to support efforts to distribute relief items to victims of flood due to torrential rains and the Bagre Dam spillage.

Recently, during its Customer Week celebration in Bolgatanga, the bank distributed NIB-branded chocolates to its customers as a gesture of friendship and care.

The Bolgatanga Branch Manager of NIB, Mr Ibrahim Issahaku, said the donation was in response to a request from the assembly towards improving the sanitation situation in the municipality.

“The bank’s gesture is also in fulfillment of one of its seven core values of community, commitment, collaboration, creativity, candour, customer service excellence and competence,” he added.

He said the bank attached much importance to clean-up campaigns and exercises because such activities helped to rid communities of filth and general unhygienic conditions.

Mr Issahaku further explained that the NIB was established to, among other things, support the country's industrialisation policies.

He added that industrialisation required a clean environment to thrive, hence the bank’s continued support to communities in its operational areas.

The Bolgatanga Municipal Chief Executive, Mr Joseph Amiyuure, thanked the NIB for the support, saying it had come at the right time because the assembly was expected to embark on a clean-up campaign tomorrow as part of the May Day celebrations to rid the regional capital of filth.