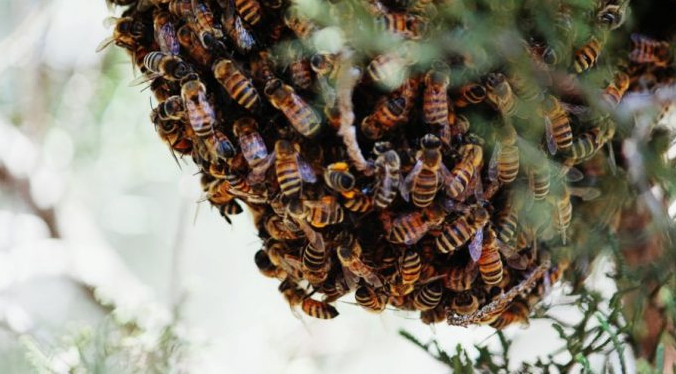 A swarm of bees caused confusion at the Bolgatanga District Police Command in the Upper East Region last Monday when the insects went on a stinging spree that resulted in the injury of two persons, including an elderly man.

One person had so far been discharged while the other person, the elderly man, was currently responding to treatment, he noted.

Chief Supt Salifu said the elderly man had come to the police command in connection with a case involving a family member and while returning home, the bees stung him mercilessly.

The man fell flat on the ground to prevent further attack on him, but the bees continued to sting him.
According to the district police commander, the police authorities quickly called in personnel from the Ghana National Fire Service and the Zoomlion Ghana Limited who managed to bring the situation under control.

Chief Supt Salifu noted that as of now, everything was calm and the district police command had since resumed work after the situation was brought under control.

Eyewitnesses alleged that the bees were attracted to the elderly man because of the perfume he had used.

About bees
Bees belong to the Phylum Arthropoda of Kingdom Animalia, and they take one of the top spots in the world when it comes to population. The major attractors to bees are scent and colour of the natural environment. Food, flowers, light and other attractors also catch the attention of bees.

What attracts bees more than anything else is scent. Bees look for flowers for pollination and to consume pollen and nectar. Therefore, they mostly get attracted to sweet, flowery scents.