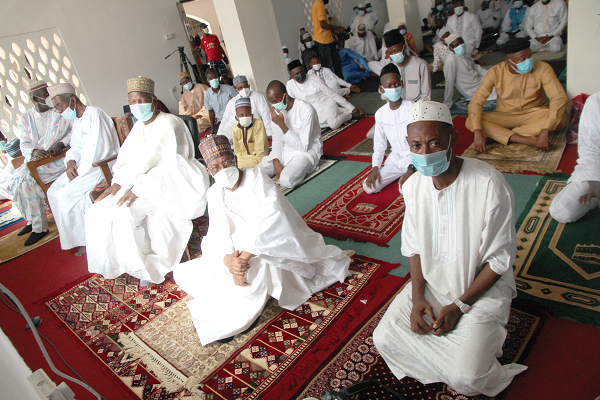 The Ahmadiyya Muslim Mission in Ghana has urged Muslims in the country to refrain from engaging in any acts that have the potential to fuel violence and disturb the peace of the country.

Rather, the mission urged them to be creators of enabling conditions that could facilitate the establishment of peace and harmony  wherever they found themselves.

Addressing Ahmadis to mark the Ramadan in Accra yesterday, the Ameer and Missionary in charge of the Ahmadiyya Muslim Mission in Ghana, Alhaji Maulvi Mohammed Bin Salih, said the country was currently under a highly provocatively charged atmosphere.

He recounted that in recent days, a section of the Ghanaian community had adopted an uncompromising and unwarranted attitude towards the emotions of Muslims.

If not restrained on time, he said, it could lead to destructive retaliatory attempts from some aggrieved Muslim youth in the country.

“They bruised the ego of Muslims and created an aggravated provocative situation which, if paid back in the same coin, can create a chaotic law and order situation in our country,” Alhaji Salih said.

“What will a Muslim gain by fasting throughout the month of Ramadan if at the end of it all, we are not tolerant, forgiving and forbearing? It will be wrong on our part as Muslims to simply give vent to our emotions, throw caution to the wind and engage in acts that have the potential of disturbing the peace of our country,” he added.

Eid-ul-Fitr, which means the festival of breaking the fast, is celebrated to commemorate the end of the month-long fast throughout the month of Ramadan.

Usually, on the morning of Eid celebrations, Muslims congregate in large crowds to offer prayers after which families and friends organise get-togethers to celebrate.

However, unlike previous years, this year’s event was limited to only few people, with strict compliance to the COVID-19 safety protocols.

“There is no difference that exists anywhere which separates Muslims from non-Muslims, be it Jews, Christians or Serbians. Are we prepared to take cue from all the wars, catastrophes as human sufferings that religious fanaticism has historically contributed to human history?” he asked.

As a peaceful country which has been blessed so far with inter and intra religious harmony, Alhaji Salih said, it was of utmost necessity that the needful was done to change the attitude of religious intolerance.

He said collectively, and as a matter of urgency, each and everyone must begin to exhibit genuine belief in peace and agree with one another to defend it.

“This can easily be attained if we all resolve to uphold good neighbourliness, peaceful and respectful co-existence and high respect for each other’s emotions,” Alhaji Salih said.

“We all need to come to terms with the fact that we in Ghana are all brethren belonging to one large family, in a homeland that we collectively share”, he added.

Under the country’s current composition as a multi-religious, multi-tribal and multi-cultural nation, he said, it was imperative that each one wished good fortunes for the other.

He said in so doing, each could trust another, regardless of whether or not they were separated by wide spaces.

That, Alhaji Salih said, would ensure that hatred and resentment would dissolve and pave the way for peace to permeate  every space of the national life and reign supreme.

“As we regret any act of insensitivity and condemn it without mincing words, we, notwithstanding, demand restraint, informed by patience and fear of God on the part of Muslim youth. Let’s give precedence to national interest over emotional pain and bruised ego,” he added.