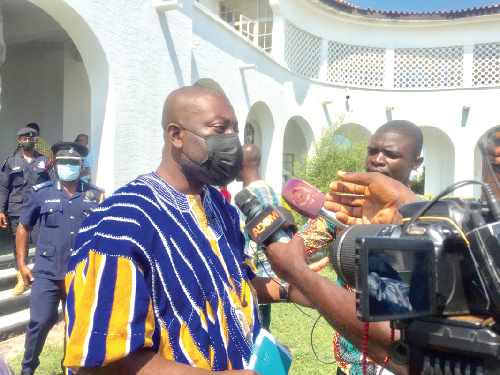 Mr Oppong Nkrumah speaking to the media in Cape Coast

The Minister of Information, Mr Kojo Oppong Nkrumah has stated that threats of extremist elements in the West African sub-region have become highly pronounced and require the general public to be brought to a higher level of consciousness.

He said recent reports of a possible terrorists attack in some parts of the sub-region and issues of piracy in the Gulf of Guinea called for extra vigilance to avert a possible attack and community disturbances.

He has, therefore, called on the media to support efforts to get the public to be security aware to promote their individual safety and the safety of communities

He was speaking during an engagement with the media in Cape Coast in the Central Region last Thursday.

“We haven’t paid a lot of attention to  these rising terrorist attacks giving what is happening in countries surrounding us.”

He added the “general public must be brought to a higher level of awareness of security issues.”

The minister revealed that some of the terrorist organisations had recruited some citizens who could wreak havoc in communities in the country.

“In some places, they have recruited some of our people and they may come into our communities to prey on unsuspecting minds”

He charged the media to effectively collaborate with security agencies to prevent extremist activities from spreading into the country, especially along border communities.

Touching on COVID 19 and its impact on the economy, he said it was evident that the pandemic had had a serious socio-economic impact on the world and Ghana.

He stressed that the blatant disregard for the COVID-19 preventive measures was worrying and could cause a delay in economic recovery.

“The focus of the government is to help the Ghanaian economy to fully recover from COVID-19 and it takes  robust economic fundamentals for all other sectors to function.”

He emphasized that “recovery stems from many of a country’s vaccinated population to maintain a robust economy.”

He noted that the government was working effortlessly to ensure that the targeted 20 million of the nation's population to be vaccinated was achieved.

He charged the public to continuously put on the face mask and get vaccinated when the opportunity is offered to protect themselves and others from COVID-19 infections.

He called on the media to eschew indecent language and untruths and to protect the media landscape from elements that sought to bring the image of the profession into disrepute.

He said if the media chose to overlook such negative practices, it would reduce the public confidence and respect for the media.

Mr Oppong Nkrumah said the government would continue to strengthen agencies to ensure that journalists were protected in their line of work.

He said the ministry was mobilising support and bursaries to build the capacities of media practitioners and improve their efficiencies.

He said a coordinated mechanism for the safety of journalists had been put in place.

The Central Regional Minister, Mrs Justina Marigold Assan, commended the media for their support towards promoting the development of the region and appealed for help to project the region in a positive light.

The media has been urged to promote security consciousness in the communities to promote the safety of individuals and communities.GEN