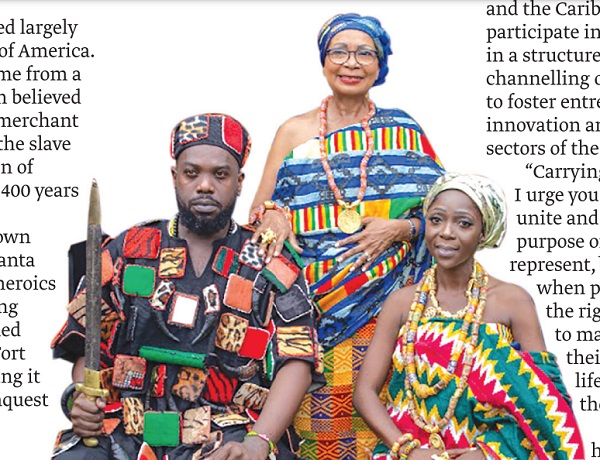 Nana Jan Kwa II (seated left) with Tamara Davis, his wife, and Ann Marie Davis (standing behind), the First Lady of the Island of The Bahamas Follow @Graphicgh

Ghana and Bahamas have established an ancestral bond after the installation of a Safohene, to represent the Ahanta Traditional Area in The Bahamas and wider Caribbean.

This follows a research tracing the origin of the people of The Bahamas to the Ahanta West and confirmed by DNA, as part of the study aimed at establishing the relationship between them and the Ahantas and the country as a whole.

The coronation ceremony for the enstoolment of Christopher Davis as Safohene with the stool name, Nana Jan Kwa II at the Ahanta Traditional Council, Busua in the Ahanta West Municipality, was attended by a high-profile delegation from The Bahamas, including the First Lady of the Island of Bahamas, Ann Marie Davis.

The process started earlier this year, when the Ahanta Traditional Council welcomed five citizens of the Caribbean Island of Bahamas, who have returned to look into their connection with Ahanta Land.

The group was able to establish that the first ever slave ship to have come to The Bahamas came from the Ahanta area, specifically, Fort Metal Cross in Dixcove.

Christopher Davis now Nana Jan Kwa II, led to Ghana, an organisation, Sankofa Flamingos Foundation – which is an activist group seeking to trace the roots of the Junkanoo Festival, a street parade with origins from African dance and culture, celebrated largely in the Caribbean and parts of America.

The festival takes its name from a man called Jan Kwa – a man believed to be a powerful Ghanaian merchant who spent his life fighting the slave trade and European invasion of southwestern Ghana about 400 years ago.

Nana Jan Kwa was a known traditional leader of the Ahanta people who performed his heroics between 1708 and 1724, taking over control of the abandoned Brandenburger fortress of Fort Fredericksburg and defending it against several massive conquest attempts of the Dutch.

At the ceremony, the Western Regional Minister, Kwabena Okyere Darko Mensah, said the GhanaBahamas relationship remained one of historic, socio-political, economic and cultural significance. “We are pretty much aware of how Ghana and the Bahamas are linked through activities of slave trade,” he said.

The connection between the two countries was strengthened from 1957 when Ghana attained political independence, when stalwarts of Pan-Africanism from the Caribbean, such as Marcus Garvey and George Padmore, worked relentlessly alongside Dr Kwame Nkrumah and other forebears in helping Ghana achieve her sovereignty.

Mr Darko-Mensah said at the declaration in 2019 of the “Year of Return,” President Nana Addo Dankwa Akufo-Addo made a strong emotional appeal to the descendants of enslaved people: “In the year 2019, the Government of Ghana opened our arms even wider to welcome home our brothers and sisters in what will become a birthright journey home for the global African family.”

Chieftaincy, he said, was one of the most ancient and enduring traditional institutions, which had displayed remarkable resilience over the period and also as a symbol of unity in modern-day society.

The minister urged the new Safohene to enhance the capacity of Ghanaian residents in The Bahamas and the Caribbean to effectively participate in national development in a structured way, through the channelling of their remittances to foster entrepreneurship, support innovation and develop priority sectors of the economy.

“Carrying the name of a warrior, I urge you to use your position to unite and fight for the common purpose of the people you represent, bearing in mind that when people come together for the right purpose, they are able to make a huge impact on their mission, which makes life much bearable for them,” he stated.

Such collocations, he said, would also advance the country’s development agenda through the use of their knowledge and skills to fill resources and knowledge gaps, as partners, and also as members and leaders of scientific and technical networks in the country.

The regional minister extended an invitation to the Bahamians, to this year’s annual Sekondi-Takoradi Christmas City Project, which would display masquerades, engage in business interactions and other planned activities.

Nana Jan Kwa II said the history, which was largely documented by European imperialists, was believed to have been written to favour the imperialists.

He said: “We are working to correct that and give a proper account of the Junkanoo story from the perspective of the people who matter most.”

The First Lady of the Island of Bahamas, Mrs Ann Marie Davis, assured the chiefs and people of Ahanta, the Western Region and the country that they would also work to enhance the cultural activities between The Bahamas and Ghana.

Nana Etsin Kofi II, the Divisional Chief of Aboadi, representing Utumfuo Badu Bonsu XV, expressed the hope that the relationship would lead to a homecoming and stronger tie between the Ahantas and the rest of the country for growth and development.