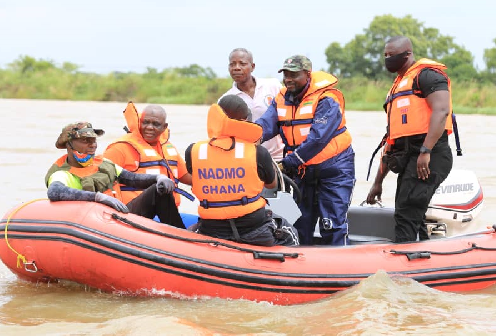 The National Disaster Management Organisation (NADMO) says it has dispatched its Operation Thunderbolt 2021 team to areas in the northern part of the country that experience flood during the spillage of the Bagre and Kompienga dams in Burkina Faso.

Operation Thunderbolt is a team of specially trained personnel of diverse fields that is deployed by the organisation to manage disasters to save lives and property.

It includes divers, rescuers, information technology officers and operation staff, among others.

Authorities in Burkina Faso have served notice of the intent to spill excess water from the two dams from today to Monday.

A statement issued by the NADMO head office in Accra yesterday said it would take about three days for the water from the dams to reach the border towns in the Upper East Region, and between seven and nine days to reach all the affected regions and districts.

The statement signed by the Director-General of NADMO, Mr. Eric Nana Agyemang-Prempeh, said the organisation was working with the district assemblies, chiefs and opinion leaders to save lives and property when the valves of the dams were opened from today to Monday.

NADMO expressed gratitude to the Ya-Na, Abukari II; the Nayiri, Abdulai Mahami Sheriga; the Tongorana, Robert Mosori; the Mion Lana, Abdulai Mohammed; the Yoo-Na, Abdulai Yakubu, and other traditional rulers for their support over the past years in the community sensitisation as part of the preparation plan towards the spillage of the two dams.

It appealed to the chiefs and the media for similar support this year.

NADMO has also entreated residents of the flood-prone areas to move to higher and safer grounds and integrate with family and friends in such areas.

“The NADMO staff and opinion leaders in such areas will help the people to move. NADMO calls on the security agencies to be on standby to help us when the need arises,” the statement said.

Nana Agyemang-Prempeh told the Daily Graphic yesterday that NADMO was well prepared for the task ahead.

He said the Operation Thunderbolt team went with the necessary equipment and human resource and that they would be joined by disaster officers in the regions to undertake the operations.

“We are going with boats and other equipment, and I can say without any shred of equivocation that we are ready,” he said.

Nevertheless, the NADMO Director-General said the involvement and the understanding of the people were crucial in reaping the expected results.