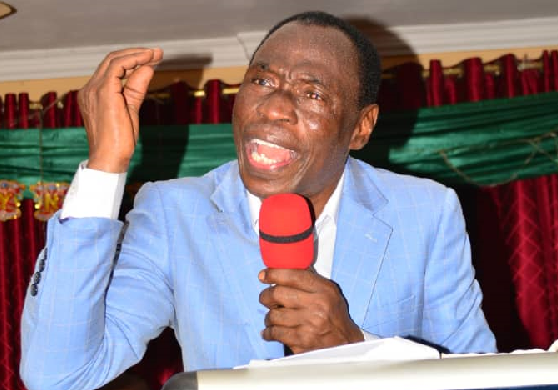 The Former General Overseer of the Evangelical Church of Ghana (ECG), Rev Dr. Daniel Gbande, has urged young people to avoid lavished marriage ceremonies and rather focus on how to choose the right partner and work to sustain their marriages.

He also underscored the need for prospective life partners to look out for red flags such as unfaithfulness, pride, self-centredness and incompatibilities that had the potential to disrupt their marriages and work on such triggers before making a decision to marry.

Dr. Gbande, who is currently the Director of New Life College and ECG School Complex, located in Tamale, said the high number of divorce cases in the country was the results of the failure of young people to understand marriage properly before getting into it.

He made that call at a marriage seminar and annual get-together organised by the Greater Accra district youth ministry of ECG held at the Old Fadama branch of the church yesterday (December 27).

A section of the participants

The event was organised to take stock of the activities of the youth ministry, educate the youth on marriage and discuss ways of building the capacity of the youth to uphold Christian virtues.

Present at the event were the General Overseer of ECG, Rev Maxwell K.K Liwangol; the national treasurer of the church, Rev James Aloriba; the Accra District Youth Coordinator, Mr. Enoch Ninsaw and other leaders of the church.

Rev Dr. Gbande said broken marriages had negative effects on children, the society and the country at large for which reason the young people desirous of getting married must be cautious of the decisions they make.

He stressed that there was no point marrying for convinience as such marriages could not stand the test of time.

"What young people need to know is that marriage is work. Wedding is only an event so it is not the lavished ceremony that is important.

"Some people make wrong decisions to marry because they are looking for lavished and wonderful weddings.

"I want to sound a word of caution that do not borrow to do a wedding because you need money to maintain the marriage and take care of the children's education," he said.

He urged the youth to work hard and make genuine money to support their families and the church.

Dr. Gbande also cautioned the youth to stay away from choosing their life partners on social media.

"Today, many young people are choosing their partners on Facebook; and you think it will work well! You must never marry a stranger. You do not know him or her," he stressed.

Touching on the ongoing brouhaha surrounding lesbian, gay, bisexual, transgender, queer and intersex (LGBTQI+) rights in Ghana, he stressed the need for the religious community to be united and stand against such "demonic and unacceptable things."

"Homosexuality and lesbianism is bad; God hates it. It is defiling our country; it will attract God's anger on this country.

"We have to continue to fight it and make sure that it does not happen. Marriage is not about homosexuality or lesbianism; God does not approve of it," he stressed.

For his part, the General Overseer of ECG, Rev Liwangol urged the youth to use the Christmas season to reflect on the birth of Jesus Christ and live according to his will.

"The birth of Jesus Christ is a sign of ultimate sacrifice so I encourage the youth to strive to meet God; do not wait for God to meet you," he said.

He also called on the youth ministry of the church to strengthen the bond between them and strive to be useful to the church.