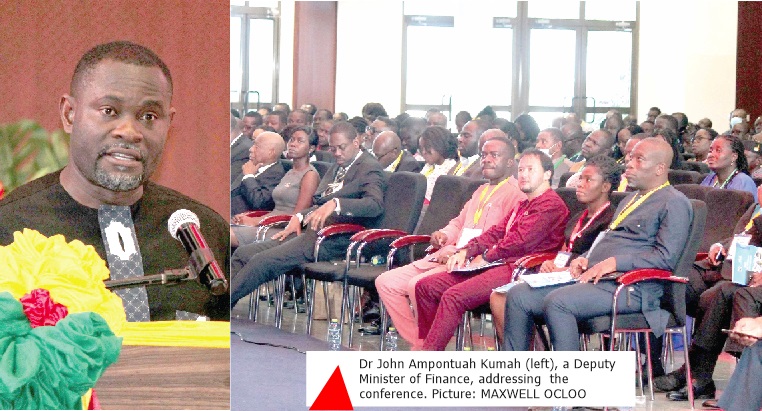 The Internal Audit Agency (IAA) has been urged to develop cutting-edge tools and programmes to strengthen the work of auditors to support the government in its fiscal consolidation efforts.

A Deputy Minister of Finance, Dr John Ampontuah Kumah, also charged auditors to perform their duties with utmost professionalism, independence, objectivity, courage and with a high sense of patriotism.

He was speaking at the close of an Internal Audit Conference organised by the IAA in Accra yesterday on the theme: “Injecting fiscal discipline into resource mobilisation and utilisation for sustainable development: The role of internal auditors.”

The three-day conference was attended by internal auditors from across the country.

Individuals, agencies and institutions who distinguished themselves in their work were honoured.

Dr Kumah further said that auditors must not compromise standards, adding “there is direct correlation between an effective internal audit function and accelerated economic development of our country. And it's for this reason that I urge you all to put the country first in your job”.

He said the government was embarking on a restructuring programme to strengthen the internal audit service to help prevent corruption and also ensure efficiency in the use of public funds.

The minister added that the programme would also enable the service to effectively play its role in the ongoing public financial management reforms by the government.

He further charged the Director-General of IAA to continue pursuing measures to reduce infractions reported by the Auditor-General and to ensure that defaulting individuals, agencies and MMDAs complied with their expenditure requirements.

The Director-General of the State Interest and Governance Authority (SIGA), Edward Boateng, emphasised the need for auditors to strengthen corporate governance practice in their respective institutions.

He said ensuring discipline, enforcing rules and the implementation of laid down statutory procedures were key ingredients to strengthening corporate governance.

Mr Boateng also urged the auditors to be bold in discharging their duties, especially in institutions where some chief executive officers did not want to be audited.

“We have the best written regulation rules in terms of corporate governance, but our problem is about implementation; auditors are the key pillar in the enforcement of some of these controls.

“If you keep your eyes away, the level of governance will continue to be low,” Mr Boateng added.