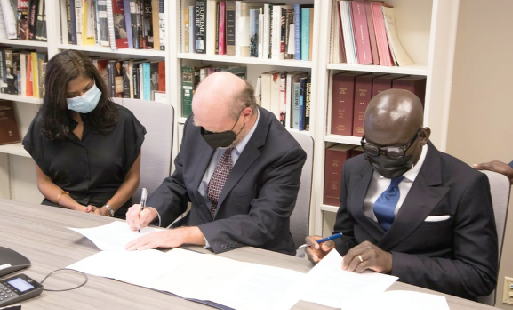 The Attorney-General (A-G) and Minister of Justice, Mr. Godfred Yeboah Dame, has brokered a deal to allow Ghanaian law graduates, lawyers and judges to benefit from scholarships to embark on further studies in the prestigious Georgetown University Law Center in Washington DC, United States of America (USA).

The agreement seeks to implement a joint graduate scholarship programme over the next five years and results from an intention to strengthen the ties between the Georgetown University and the legal fraternity in Ghana, enhance the linkages between the people of Ghana and those of the USA and improve cooperation between the two countries in the field of legal education.

It was made official last Thursday when the Attorney-General visited the USA last week.

Mr. Dame signed the agreement for the A-G’s Office, while the Executive Vice-President and Dean of the Georgetown University Law Center, Professor William M. Treanor, signed for his institution.

Under the agreement, the Georgetown Law Center, in collaboration with the Scholarship Secretariat, will offer scholarships to five Ghanaians selected by a selection committee every year, to pursue Master of Laws (LLM) and doctorate in Law (SJD) degrees every year for the next five years.

The committee will be set up between the two parties and chaired by a Ghanaian alumnus of the Georgetown Law Center.

The agreement comes into force immediately and will admit students to the Georgetown Law Center from 2022.

Speaking at the signing ceremony in Washington DC, Mr. Dame expressed his delight at the opportunities the programme offered, saying it would further help enhance Ghana’s bar.

He said it was significant that Georgetown was not only famed for its tradition of training lawyers but had also made an impact on the Judiciary, the Legislature and the business world.

“Georgetown has had a relatively long tradition of training lawyers, since 1870. The quality of the training imparted by Georgetown is reflected in the soundness of the contribution by its alumni to the development of America and the world.

It has produced alumni who have served and continue to serve in important offices of the Federal Government of the United States, the judiciary, the legislature, the business world and academia, he said.

“I have no doubt that the richness of its Law Faculty will positively impact on the number of Ghanaian lawyers and law graduates to profit from this agreement,” the A-G intimated.

He also said the breadth of programmes the Georgetown Law Center offered would be of immense benefit to Ghana.

“The breadth of programmes the Georgetown Law Center offers is the most diverse in the United States. Courses such as international economic law, arbitration and dispute resolution, securities and financial regulation and national security law will be of immense assistance in the shaping of the developmental agenda of Ghana,” he stressed.

The A-G also said the agreement was further proof of his desire to ensure that Ghana had a functional and relevant legal system that was good enough to meet the challenges of an emerging economy.

“This agreement is in furtherance of my desire to ensure that Ghana has a functional and relevant legal system capable of meeting the challenges of an emerging economy, and that lawyers are equipped with the skills required in a modern economy.

“In this regard, back home, the government has already taken significant steps with the massive increase in student admission to the Ghana Law School last year, coupled with the ongoing construction of the Law Village Complex, as well as the steady construction of a new 12-storey building for the Office of the A-G.

“I assure you of the quality of Ghanaian law graduates and lawyers to be selected for the pursuit of the programme. I believe the quality of the products will compel you to increase the scholarships to afford more Ghanaians the opportunity to pursue the programmes in the next few years,” Mr. Dame said.

Prof. Treanor expressed his delight at the personal leadership of the A-G in the development of the programme and the signing of the agreement.

He expressed the hope that with the A-G’s leadership, further areas of cooperation with the Georgetown University Law Center, particularly in the training of judges, could be explored in the very near future.

The Dean of International and Graduate Programmes at the Georgetown University, Prof. Madhavi Sunder, who was also at the signing ceremony, expressed satisfaction with the partnership and hoped that it would be expanded in the near future to create more opportunities and benefits for Ghana and the Georgetown Law Center.

“Georgetown has agreed to fund a substantial part of the cost of tuition for students, while the government of Ghana will fund the rest, in addition to costs associated with our duty of care of Ghanaian students under our patronage.

“For this, we have the A-G to thank. His initiative has brought us to this point,” he indicated.

The Georgetown University is a private university in Washington, DC.

It is the oldest Catholic and Jesuit higher educational institution in the US, founded in 1789 by John Carroll, the first Bishop and Archbishop of the US, in the national capital of the United States.

Famous alumni include two former US presidents, Bill Clinton and Lyndon Johnson, as well as several other Heads of State, including King Felipe VI of Spain and King Abdullah II of Jordan.