Appiatse explosion: We thank God for the ambulances - Hospital administrator 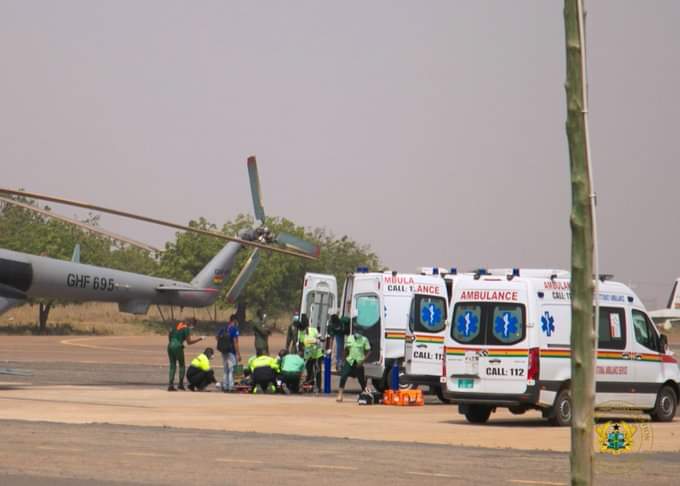 The timely presence of ambulances during the rescue and treatment of victims of the devastating explosion which occurred at Appiatse helped save lives. Follow @Graphicgh

Officials of the Aseda Hospital at Bogoso have praised the timely presence of ambulances during the rescue and treatment of victims of the devastating explosion which occurred at Appiatse, close to Bogoso, on Thursday.

According to the doctors and nurses, the 11 ambulances which came from adjoining districts to support the victims were critical to saving lives, and providing timely medical care to the several dozen people who got injured after a vehicle conveying mining explosives collided with a motorbike, burst into flames and exploded.

The ambulances were procured under Government’s ‘One Constituency One Ambulance’ programme, under which over 300 ambulances were purchased to re-tool the National Ambulance Service and make healthcare more accessible to the ordinary Ghanaian.

Taking Vice President Bawumia and other members of a Government delegation round the beds of some victims of the blast on Friday, Administrator of the Health Centre, Mad Elizabeth Abaka said the ambulances were ‘life-saving’, facilitating the stabilization and swift transportation of victims to health facilities, including Aseda, and commended government for the initiative.

Addressing the media after the visit, Vice President Bawumia on behalf of Government, thanked the doctors and nurses at the facility for the “fantastic job” they continue to do to save lives.

“Their early intervention yesterday has helped a lot. We want to assure all those patients in there and their families that Government is going to be responsible, fully, for all their medical bills and anything else associated with their recovery. So everything else you let us know,” he assured.

The Vice President also thanked the emergency response teams, the Ghana Ambulance Service, Police, Fire Service, NADMO, Ghana Armed Forces, health personnel, security and people within the town and adjoining communities who came to the aid of the injured.