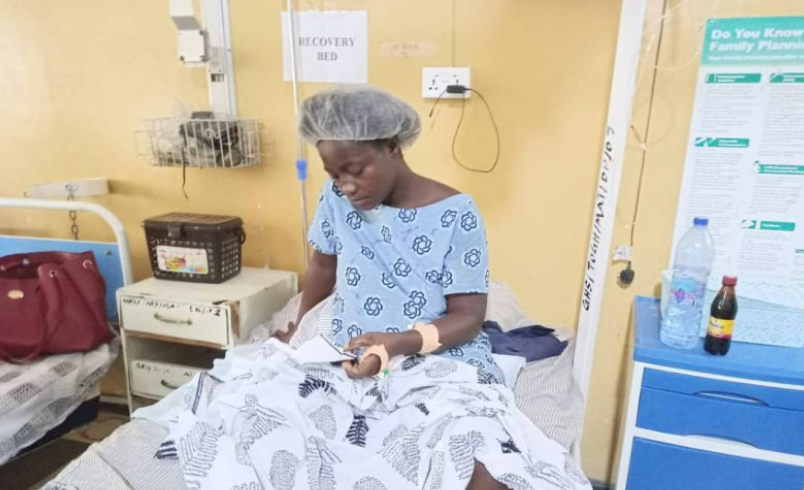 A three-month pregnant woman who survived the Appiatse explosion Which killed more than 13 people, has shared chilling details of how she pulled through last Thursday’s tragic incident.

Grace Morgan, 32, witnessed the incident at first hand and said the explosion happened "very close to my shop along the main road. I'm surprised I didn't die..."

The victim, a mother of three, told the Ghana News Agency that she had returned from Kumasi Thursday morning and was around her shop when the truck collided with a tricycle and caught fire.

She said some men at the accident scene initially, "tried to douse the fire with water," but were unsuccessful.

Madam Morgan said after about "30 minutes" of unsuccessful attempts to extinguish the fire, she suggested that they used soapy water so, she decided to go back home for a detergent to make the water soapy.

The trader said a few minutes after she had moved away from the scene, the truck exploded.

"All I heard was boom! All of a sudden I couldn't see anything. There was heavy dust everywhere. I saw someone run across me so I followed the person's direction not knowing what was happening.

"I was lost in my thoughts and when the dust settled, I saw people lying lifeless with some also injured. Immediately, I rushed home to check on my children not knowing I had been wounded in the process," she said.

Madam Morgan said: "I was surprised I didn't die because I was very close to the scene."

She said her shop was totally destroyed with GH¢3,000, which she had tied in a polythene bag to pay her suppliers, saying: "My only joy now is that my children are not hurt."

The pregnant woman is currently receiving treatment at the Apinto Government Hospital in Tarkwa in the Western Region.

She had a metal lodged in her left thigh and successfully underwent surgery on Friday, January 21, 2022, nurses at the Hospital told the GNA on Saturday.

The nurses said she was "in a stable condition" and had been put on "pain medication."

Some five other victims, including a four-year-old boy are on admission at the Apinto Government Hospital.

The boy sustained "minor cuts" on his face and other parts of his body, health officials at the Hospital said.

They said all the victims were responding to treatment.

Preliminary investigations by the Police have established that a vehicle transporting mining explosives from Tarkwa to the Chirano Gold Mines collided with a motorcycle resulting in the explosion at Appiatse, a farming community between Bogoso and Bawdie in the Prestea Huni-Valley Municipality of the Western Region.

Thirteen people were confirmed to have been killed in the disaster with 179 others injured. The Minerals Commission on Saturday shut down Maxam Ghana Limited, owners of the explosive truck, to pave way for investigations into the accident.

Vice President Mahamudu Bawumia who led a Government delegation to the community, said Government would collaborate with the State Housing Corporation and mining companies to construct temporary housing facilities for those displaced in the explosion.

The Vice President said Government would foot the medical bills of the injured and provide them the best of healthcare.

On behalf of Government, he donated GH¢200,000 to the bereaved families and presented assorted items, including mattresses, rice, cooking oil and toiletries to 300 displaced persons accommodated at the Bogoso Catholic Relief Centre.