Allocation of Kejetia Market stores: Otumfuo tells KMA to back off 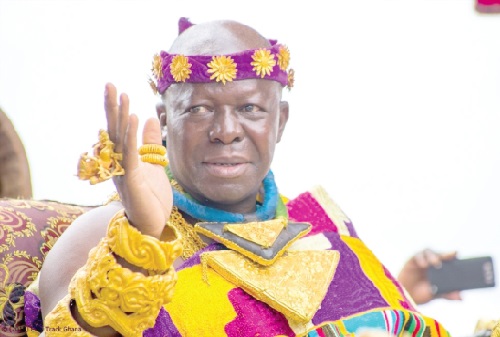 The Asantehene, Otumfuo Osei Tutu II, has charged the Ashanti Regional Minister not to allow the Kumasi Metropolitan Assembly (KMA) to take charge of allocation of stores in the second phase of the Kejetia Redevelopment Project.

Rather, he said, the Regional Coordinating Council should take up the responsibiliy to prevent the stores going to underserved persons.

Addressing the end of year meeting of the Regional House of Chiefs in Kumasi last Wednesday, the Asantehene said allowing the KMA to handle the allocations would deny the affected traders access, and would cause untold hardships to the people as was experienced in the first phase.

He asked the RCC to ensure that all the traders who had been relocated from the Central Market to pave the way for the project were served first before any other persons were given allocation.

As of October this year, consultants of the project said 99 per cent of project designs (engineering), 63 per cent of procurement, and 27 per cent of the physical construction works had been completed within a period of about 32 months.

Otumfuo Osei Tutu also proposed to the government to use the estimated cargo traffic of the Boankra Inland Port to seek funding to fully complete the project.

He said it should be possible for the government to use the expected outcome of the project to secure funding to complete both the port and the railway lines from Tema and Takoradi ports to make the project viable.

The Asantehene said it would be unfortunate for the Boankra Inland Port to suffer another delay as a result of funding as happened with the initial project.

It was the last meeting of the year for the members of the Regional House of Chiefs.

The Asantehene acknowledged that the country was in economic crisis, and that the possibility of some projects being affected was evident.

He. however, called on the government to ensure that those projects that had the potential to create jobs for the people were given the necessary funding to be completed.

The Ashanti Regional Minister said since assuming office in 2017, the government had paid attention to the road and health sectors in the region because the region had one of the poorest road networks in the country.

Mr Osei-Mensah said a total of 948.9 kilometres of highway roads had been given on contract, out of which 318km had been completed.

He said some 203 contracts on feeder roads had been awarded translating into 2,679km of roads.

He admitted that some of the contractors had left site as a results of the inability of government to honour some of the certificates.

He, however, assured the chiefs that all road projects in the region would be completed to ease the challenges facing most of the residents.

On the congestion on most roads within the metropolis, Mr Osei-Mensah said he had to apply human face to the situation as most of the drivers were forced to convert part of the roads to stations.

He said the first phase of the Kejetia Redevelopment Project changed the initial use of Kejetia from a transport terminal to a market thus forcing out over 900 vehicles onto the streets.

He said the second phase however would create space for vehicles to ensure that the drivers leave the streets.