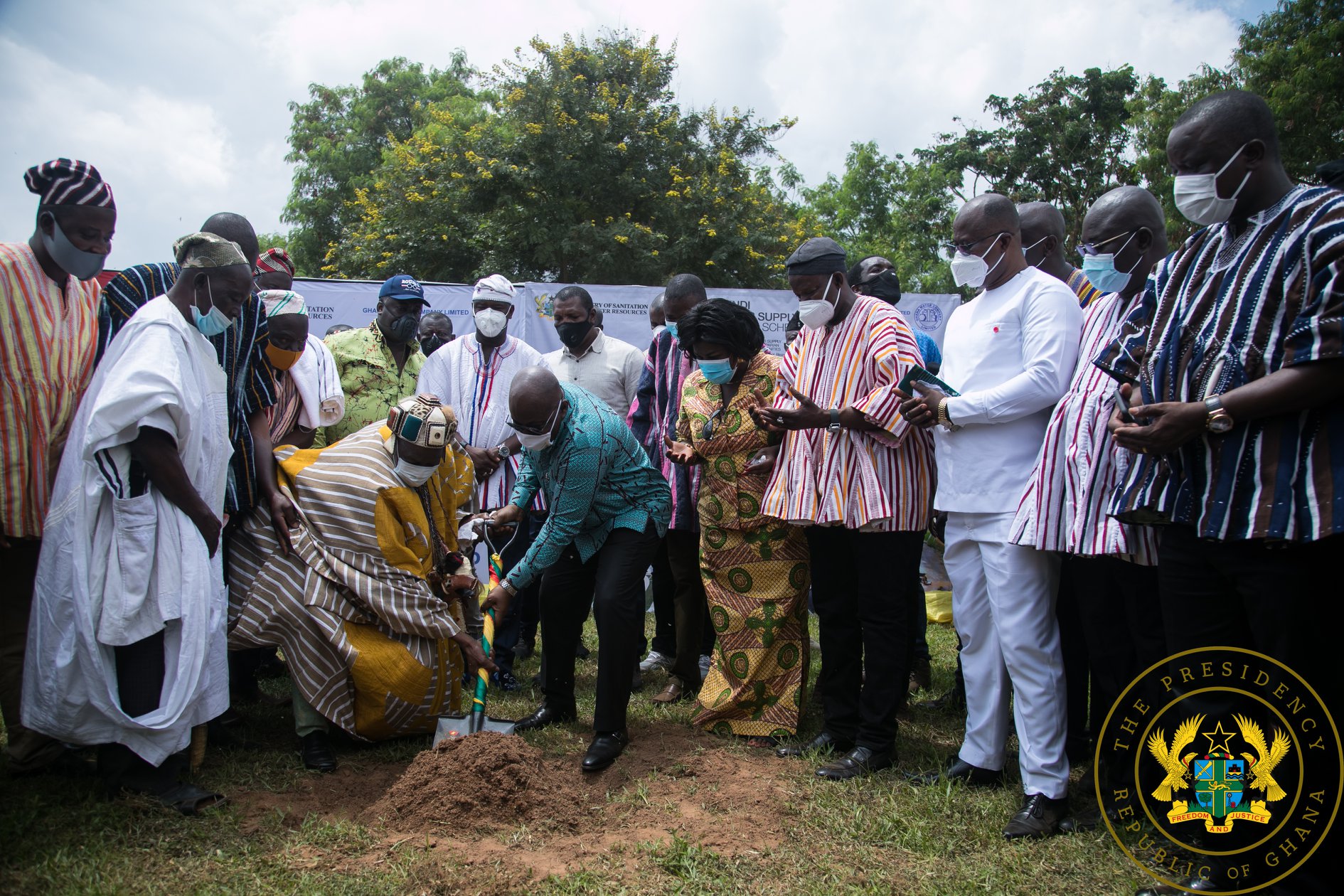 President Nana Addo Dankwa Akufo-Addo, on Tuesday, 28th July 2020 cut the sod for the construction of the Tamale Water Supply Project, as part of his tour of the Northern Region.

According to President Akufo-Addo, the Tamale Water Supply Project seeks to expand the supply capacity of the Tamale Metropolitan area, and also improve upon the flexibility of water supply, by building a new water supply system which will rely on the White Volta at Yapei, with a 29.7 million gallons per day capacity water treatment plant.

“This will be, by far, the biggest water project in the five northern regions, and the second biggest in the history of our country,” he said.

Explaining the rationale for the Project, the President stated that Tamale, like most parts of the country, is faced with rapid population growth, which, unfortunately, has been a key factor militating against the provision of adequate social infrastructure for Ghanaians, with the demand for water outstripping supply in Tamale.

He recounted how, in 1971, under the Progress Party Government of the late Prime Minister Kofi Abrefa Busia, the Tamale Water Supply System, at Nawuni on the White Volta River, was constructed to serve Tamale and its environs.

“I have recounted the history of water supply to Tamale in order to place in proper context the significance of the current intervention to meet the water demand for Tamale and its environs, looking at a planning horizon up to the year 2040,” he said.

Government, President Akufo-Addo said, will construct a new water treatment plant at Yapei, thereby making available two water supply systems working concurrently to supply water to Tamale and its environs in order to guarantee the availability of enough potable water in the Metropolis, as this will extend the coverage area of water supply.

“To execute this project on a turnkey basis, Government has secured a credit facility amounting to two hundred and twenty-three million, two hundred and eighty-seven thousand, nine hundred and seventy–nine United States dollars, fifty-six cents (US$223,287,979.56) from the UK Export Finance and the Deutsche Bank AG, London Branch,” he said.

The President continued, “I am happy to state that, upon completion, the Project will provide potable water to over seven hundred and ninety-two thousand (792,000) inhabitants of Tamale and its environs. This ties in with Government’s agenda of ensuring that, by the year 2030, as enshrined in the United Nations Sustainable Development Goals, all Ghanaians will have access to potable water, in other words there will be ‘Water For All’”.

Reiterating his Government’s policy to ensure that all the sixteen (16) regions of the country have access to water, he told residents of Tamale that since he assumed in 2017, his Government has embarked on securing funding for the construction of water treatment plants, to increase access to water of the citizenry, and to create the enabling environment to attract local as well as foreign investors.

Government, the President assured, “is going through the process of securing funding for the Tarkwa, Fanteakwa-Begoro, Hohoe, Assin Fosu, Kpong Phase II, and Dambai Water Supply Projects, as well as the Weija Dam Rehabilitation, and Barekese Dam Expansion Projects.”

President Akufo-Addo also has cut the sod for the construction of the Yendi Water Supply Project, in fulfilment of a pledge he made to Yaa-Na Mahama Abukari II at the 2019 Damba Festival.

The Water Supply Project, being financed by a $30 million facility from the India Exim Bank, is aimed at providing the people of the Yendi Municipality and its environs with fifteen thousand (15,000) cubic metres of water daily to meet the water demand from now till the year 2040.

Cutting the sod for the construction on Wednesday, 29th July, 2020, President Akufo-Addo indicated that communities earmarked to benefit from the Project, upon completion, include Yendi, Ghani (Ngani), Sambu, Adobo, Sokoli, Nakpachei, Gbungbalaga and Kuga.

“Yaa-Na Mahama Abukari II, when I told you that ‘great days lie ahead of Dagbon’, this is what I meant, as this Project signals the beginning of infrastructural development for Yendi. And, as you know by now, when Akufo-Addo makes a promise, he keeps it,” he said.

The President stated that it has been fifty-nine (59) years since the construction of the original Yendi Water Supply System, which took its raw water source from the River Daka.

“Since its construction, it has not undergone any rehabilitation works, and it is no longer capable of satisfying the water needs of Yendi and its environs. Additionally, because of the considerable increase in population and economic growth, it has become necessary to construct a new water supply system to meet the water demands of Yendi and its adjoining towns and communities,” he added.

The President continued, “Yaa-Na Mahama Abukari II, when I told you that ‘great days lie ahead of Dagbon’, this is what I meant, as this Project signals the beginning of infrastructural development for Yendi. And, as you know by now, when Akufo-Addo makes a promise, he keeps it.”

President Akufo-Addo assured residents of Yendi, and, indeed, all Ghanaians, that Government’s commitment to protecting the country’s water-bodies, that serve as the sources for the provision of potable drinking water for the Ghanaian people, is unwavering.

“We continue to wage war against, and intensify our resolve to curb the activities of illegal miners (galamseyers), sand winning and farming along the banks of our water bodies, which lead to their pollution,” he added.

Thanking the Indian Government and Prime Minister Narendra Modi, through the Indian Exim Bank, for making available the financing for the Yendi Water Supply Project, whose impact, upon completion, will be immense for the people of Yendi and its surrounding towns, he said it is a “good testimony of the strong bonds of co-operation and collaboration that exist between our two countries. Long may it continue.”

He urged the contractor, Messrs. WAPCOS Ltd of India, to complete this project on schedule, and help deliver potable water to the beneficiary towns and communities.

Concluding, the President thanked the Yaa-Na “for the gracious gesture and honour of conferring the chieftaincy title, Dagbon Malti Naa Abudani I, on me, and I promise you that I will do my best to live up to the title.”