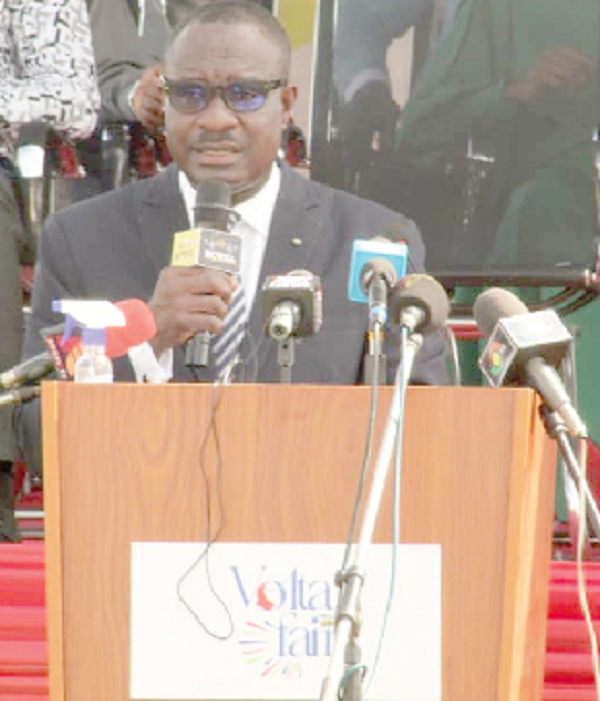 The President of the ECOWAS Bank, Dr George Agyekum Donkor, has underscored the importance of focusing on agribusiness, ICT and tourism as driving forces for job creation.

Delivering a keynote address as the guest of honour at the official opening of the 5th Volta Trade Fair in Ho last Wednesday, on the theme, “Promoting Sustainable Trade and Investment”, Dr Donkor said the Volta Region had many tourist attractions which could easily become the backbone of the region’s economy, while its agriculture sector employed approximately 74 per cent of the active population.

He said there was, however, the need to successfully transition from farming to take advantage of the entire agribusiness value chain in order to bring increased value to players in the industry.

"It behoves all stakeholders to play key roles to optimise the respective value chains.

The government should work towards the provision of the appropriate infrastructure.

"The bank will continue to play its role in the foreseeable future as a strategic development partner.

The bank is ready and willing to consider projects in these and other sectors of the Ghanaian economy, with the view to creating jobs and increasing the quality of life of the Ghanaian populace," he assured.

The two-week fair will provide large, medium and small-scale foreign and indigenous businesses with the platform to showcase their products, services and take advantage of the gamut of opportunities to be made available.

The event, which played host to the ambassadors of Togo, Kenya, Namibia and South Africa, amongst others, also served as a one-stop- shop for business support services, investment and match-making sessions, among others.

The Chairman of the Volta/Oti Regional Chapter of the Association of Ghana Industries, Mr Dela Gadzanku, said trade promotion was significant in the economic development of every country and as such called on the government to institute some reforms in its trade policies, especially on import pricing, so as to make Ghanaian competitors better off on the local market.

He said the AGI was dedicated to the cause of ensuring that the Volta Fair remained successful in order to build bridges and institute competitiveness and profitability across the various business spectrums.

The Executive Director of the Volta Development Forum (VDF), Dr Prince Kofi Kludjeson, said the forum, as part of its initiative sought to work towards moving the region forward.

Calling on development partners to support the region, Dr Kludjeson also announced that the Ghana EXIM bank was offering its support in the transformation of the region's tourism sector into a hub with support for other businesses in the region.

He called on the ambassadors and high commissioners to invest in tourism infrastructure in the region, especially the establishment of hotels for tourists' accommodation.

The South African High Commissioner to Ghana, Ms Chris Janette, stated that South Africa was committed to promoting sustainable investment in the Volta Region and by extension, Ghana.

She said the country's energy sector would receive support through investment into renewable energies, while also ensuring sustainable development in agro- processing and the creation of a resilient agricultural value chain.