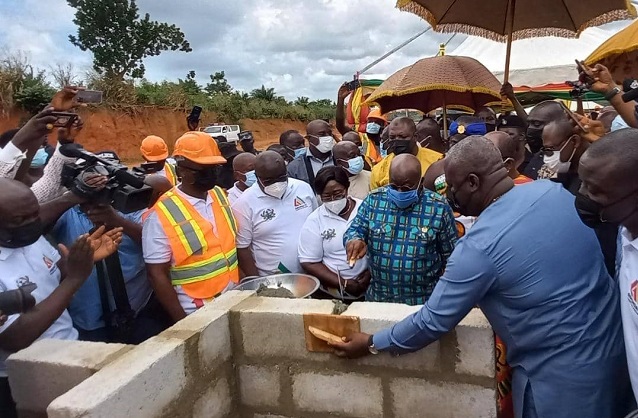 The President Nana Addo Dankwa Akufo-Addo on Tuesday, August 17, 2021 cut the sod for the commencement of the construction of the Trede District Hospital in the Atwima Kwanwoma district of the Ashanti Region.

Speaking at the ceremony to kick start the construction of the project, Nana Akufo-Addo said this was the biggest investment in healthcare in the country and was glad that it was happening during his tenure.

“I am glad that it is under my tenure as the President of the Republic that the biggest ever investment in the nation’s healthcare is being made,” he said.

According to him, the coronavirus pandemic exposed the deficiencies of the healthcare system as a result of years of under investments and neglect.

He said the huge investment into the healthcare sector was to address the uneven distribution of healthcare infrastructure and also make Ghana the centre of excellence in healthcare delivery in the sub region.

According to the president, about $6 billion is spent annually by Africans to seek medical care abroad and was hopeful that when completed, the sector could generate about $2 million to the country’s GDP annually.

Aside from improving healthcare of the people, he said the construction of the 88 district hospitals would also provide about 250 domestic contractors who would supervise the work and also be maintained by domestic facility management professionals as part of the government policy of developing domestic capability in the building and construction sectors of the economy.

“This, would undoubtedly help retain most of the money in the country to engender further investment,” he said.

He said it is estimated that 25,000 people would be employed during the design and construction phase of the 111 hospital that providing direct jobs to architects, masons, carpenters and other construction workers in the country.

Once completed, he said about 20,000 health professionals including doctors, specialists, nurses and other allied health workers would be employed thus reducing the unemployment rate in the country.

Out of the 111 hospitals, the President said the sites for 88 were ready for the commencement of the project while the other 13, would start later in the year.

There are provisions for a mortuary, waiting and security pavilions, accommodation facility for families and doctors (separated), a laundry, waste management and energy centre, kitchen, central store and maintenance yard.

Ghana first agenda
According to the president, the Agenda 111 was a carefully thought out programme to inspire growth in the various sectors of the economy and also help bring jobs to the youth, adding, “It is a Ghana first agenda.”

He said a consortium of 20 firms made up of architects, civil, structural and mechanical engineers, quantity surveyors, biomedical engineers designed the hospitals to reflect “our unique domestic requirements including impact of climate, social cultural conditions and traditional practices.”

The Ashanti Region is expected to benefit from 15 out of the original 88 district hospitals.

The chief of Trede, Nana Nuben Sra III, was grateful to the president for siting the project within his community which he said would go a long way to improve on the healthcare needs of the people and also reduce the time residents spend in search of healthcare.