Massive clean up at Agbogbloshie 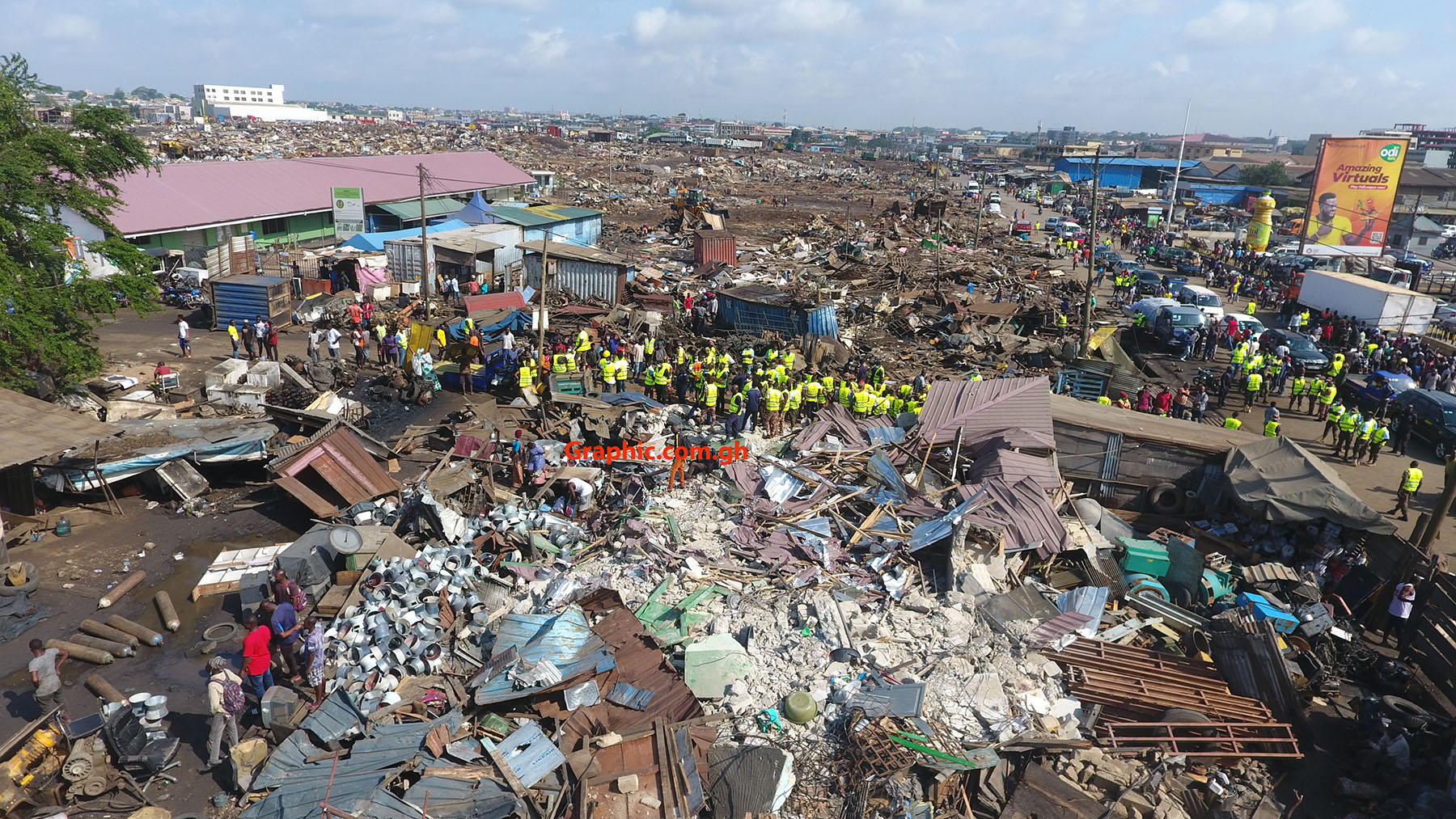 A week-long massive clean-up exercise has commenced at the Onion market and scrapyard area at the Agbogbloshie Market in Accra to bring sanity to the area and secure the land for future development.

Thursday, a team from the GARCC and the Ablekuma Central Municipal Assembly, with the support from security persons, stormed the Agbogbloshie area to begin the clean-up exercise in the reclamation process.

The relocation, clean up and reclamation form part of the Regional Minister, Mr Henry Quartey’s “Let’s Make Accra Work” initiative aimed at decongesting the Central Business District (CBD) of Accra to ensure the free flow of vehicular traffic and give it the national capital image Accra requires.

Thursday, the Daily Graphic joined the team for the exercise and observed that although there was an initial resistance from some traders, they later had to comply and move out as the team began to demolish structures. 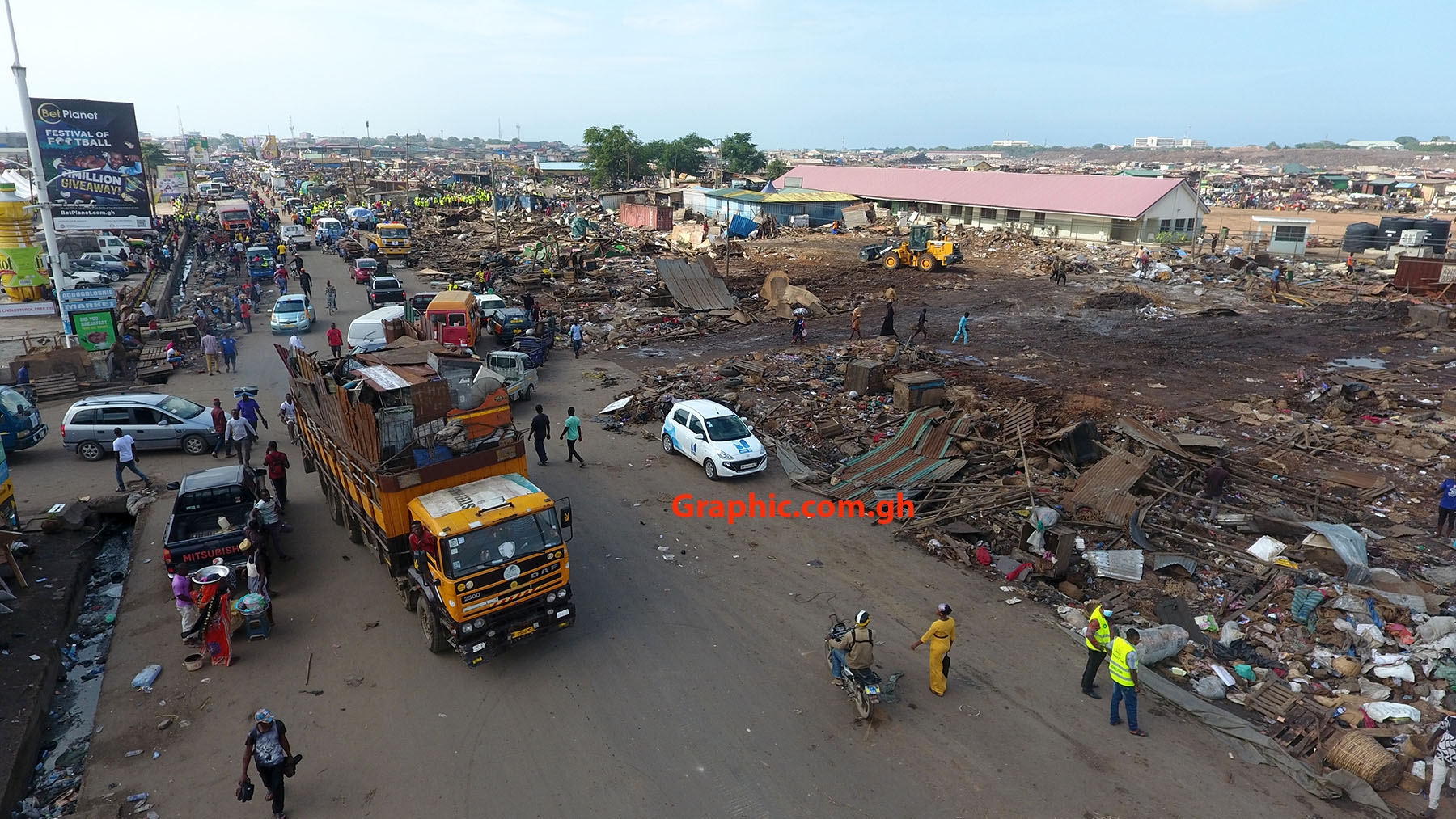 When the team arrived at the area as early as 6 a.m., the Onion market had already been deserted, with only a few traders loading their wares onto trucks, ostensibly to move out as well.

Members of the security agencies, including the Ghana Armed Forces (GAF), the Ghana Immigration Service (GIS) and the Ghana National Fire Service (GNFS), were present to man the area and ensure the exercise was devoid of any mishaps.

The waste management company, Zoomlion Ghana Limited, also had a team present to support the exercise with logistics, comprising tipper trucks, bulldozers, an excavator, as well as towing cars.

The security personnel formed a human wall along the stretch where the operation was taking place, while the road was blocked from the Central Mosque traffic light to Agbogbloshie, only allowing vehicles to exit the area but not to enter or pass through, as was often the case.

Once the team was sure that no life would be put in danger, the bulldozers were set to work, pulling down all structures <\_> kiosks, metal containers and other structures that served as shops for some of the traders <\_> turning them into rubble.

The exercise, which was largely successful, exposed tonnes of rubbish, mostly rotten onions that had been dumped indiscriminately.

The strong stench that emanated from the area, particularly the onion market, highlighted the unhygienic conditions at the place.

After the demolition of the structures, trucks were loaded with the rubbish, which was transported to the Nsumia landfill site in Nsawam.

While onion traders had complied with the directive and moved away, some scrap dealers resisted, arguing that they were not served any notice to vacate the place.

Some pelted stones and fired shots at the security persons to drive them off the area, temporarily creating a chaotic scene.

The strong security presence averted any unfortunate incident, as they overpowered the irate traders, who later dispersed.

The regional minister commended the security apparatus and other stakeholders for ensuring the success of both the relocation and the clean-up exercises.

He noted that the area had contributed immensely to sanitation-related challenges in the capital, explaining that due to the activities of scrap dealers at the area, Ghana had been ranked first in terms of hazardous e-waste.

Mr Quartey said previous governments had, in the past, unsuccessfully attempted to bring sanity to the area, stressing that with the plan carried through now, there would be no turning back on the decision to clear the area.

“Although from the onset there were some challenges between the RCC and the traders, in the end they collaborated with us and that has ensured the success of this relocation exercise,” he said.

He disclosed that after the exercise, the whole place would be condoned off to prevent any encroachment and later the area used for other development.

“There are some who may try to resist, but that will not hold. We are making sure that this whole area is brought to ground zero, whether they support it or not, and once that is done, we will put a fence around it to secure it,” he stressed.

He commended both the Majority and the Minority caucus in Parliament for ensuring that the exercise was carried out without political gimmicks.

“If all developmental projects were addressed this way, I believe the country would be more developed than what we are seeing now,” he added.

On the issue of scrap dealers, Mr Quartey said the government made available GHc50,000 to facilitate their relocation but they rejected the offer.

“When the committee in charge of the disbursement called their leadership to come for the money, they refused to take it. They said they were going to fight us because they will not move.

“But the thing is that no matter what happens, nobody will be left here; there are other lands available for them to engage in their trade there if they want to still do this, but this place is not for them any longer,” Mr Quartey said emphatically.

After a stakeholders’ engagement between the GARCC and the bulk breaking traders, a seven-week ultimatum was given for the relocation exercise to a new facility constructed at Adjen Kotoku.

To facilitate their relocation, the government, through the GARCC, made available GH500,000 to be used for the carting of wares to the new site.

While various groups complied and fully moved out last Wednesday, a day to the July 1 deadline, the scrap dealers refused to move peacefully. 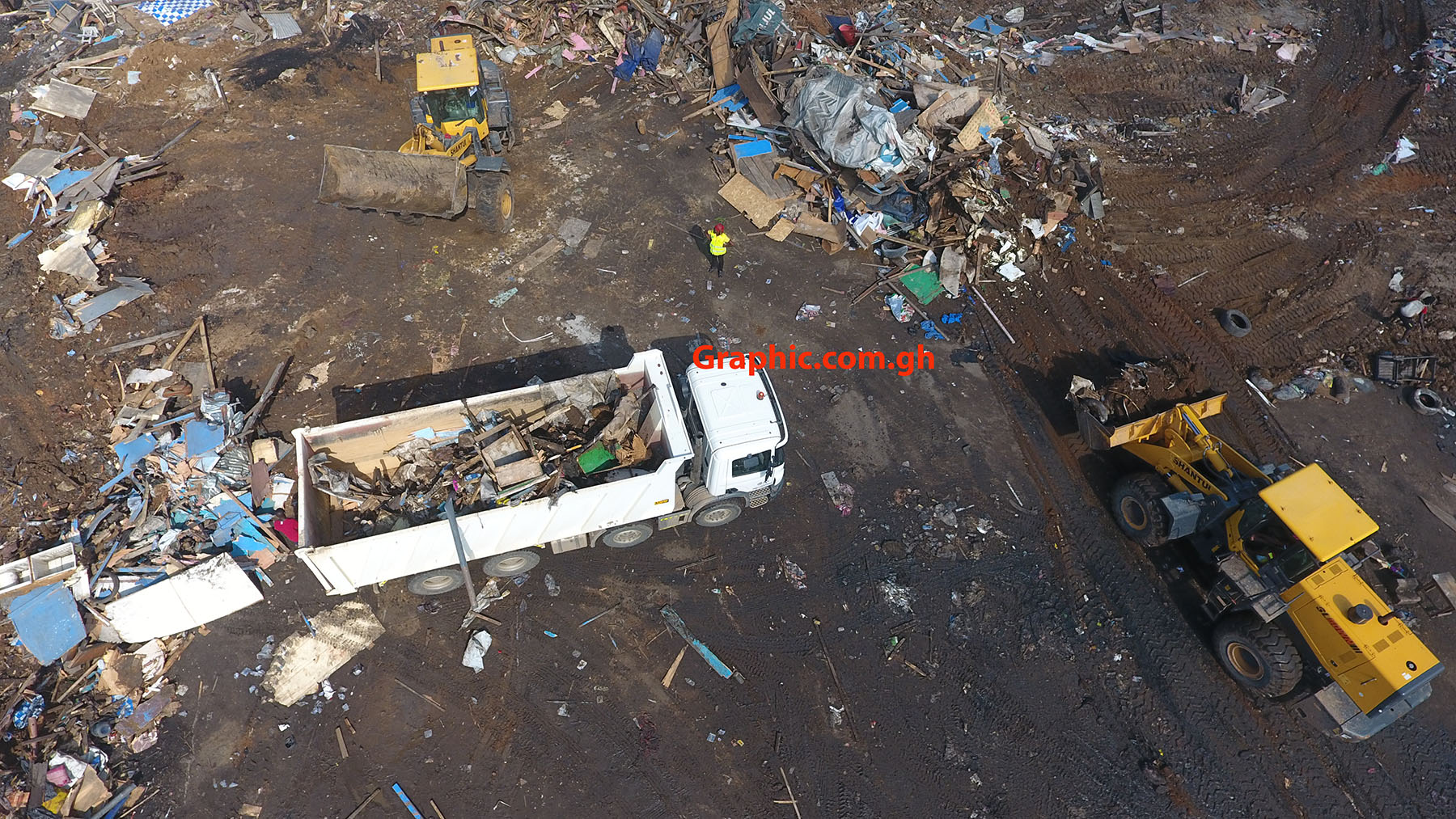