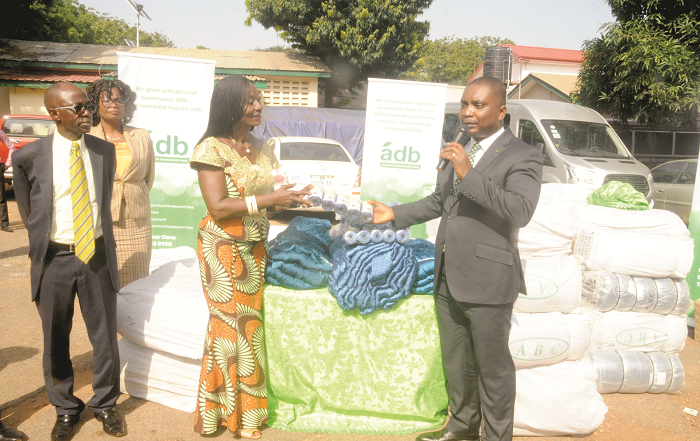 The Agricultural Development Bank Limited (Adb) has donated fishing materials valued at GH¢100,000 to be distributed to fishermen in some fishing communities which were hit by tidal waves recently.

The waves, which occurred between August 22 and September 4, 2016, claimed one life at Glefe in the Ablekuma South Constituency and rendered scores of fisherfolk homeless, while others were dispossessed of their canoes, ropes, fishing nets and outboard motors.

Other communities along the coastline which were affected include Chorkor, Odododiodio, Teshie, Bortianor, Ada and James Town in the Greater Accra Region; Nyanyano and Manford in the Central Region; Axim and Half Assini in the Western Region and Keta in the Volta Region.

The waves, attributed to global warming, were said to have also occurred in a number of spots around the world.

Presenting the materials, which included 73 bundles of fishing nets and four boxes of fishing twines, the Managing Director (MD) of Adb, Mr Daniel Asiedu, said the gesture was to support the fisherfolk whose fishing gear were ravaged by the waves.

He said Adb was committed to the financing and development of the agriculture sector and could not leave the burden of supporting the tidal wave victims to the government alone.

Mr Asiedu reiterated the commitment of the bank to support the country’s farmers and fishermen through the provision of credit and other facilities.

He said the bank, which had been sponsoring the annual National Farmers Day awards for the past 14 years and providing the National Best Farmer of the year with a three-bedroom house, would continue to support the government to ensure the development of the agriculture sector.

Responding to plight of fisherfolk

The Minister of Fisheries, Ms Sherry Ayittey, who received the items, thanked the Adb for supporting the affected fishermen.

She called on other organisations to support the government to respond to the plight of the fishing communities who had lost their source of livelihood to the violent waves.

Later in an interview, Ms Ayittey told journalists that the ministry had compiled a list of all the affected victims and made a request to the state for support for them.

“We have received positive feedback and plans are far advanced to have all the affected fisherfolk gather at the forecourt of the State House where they will receive financial support and some relief items by mid November.”