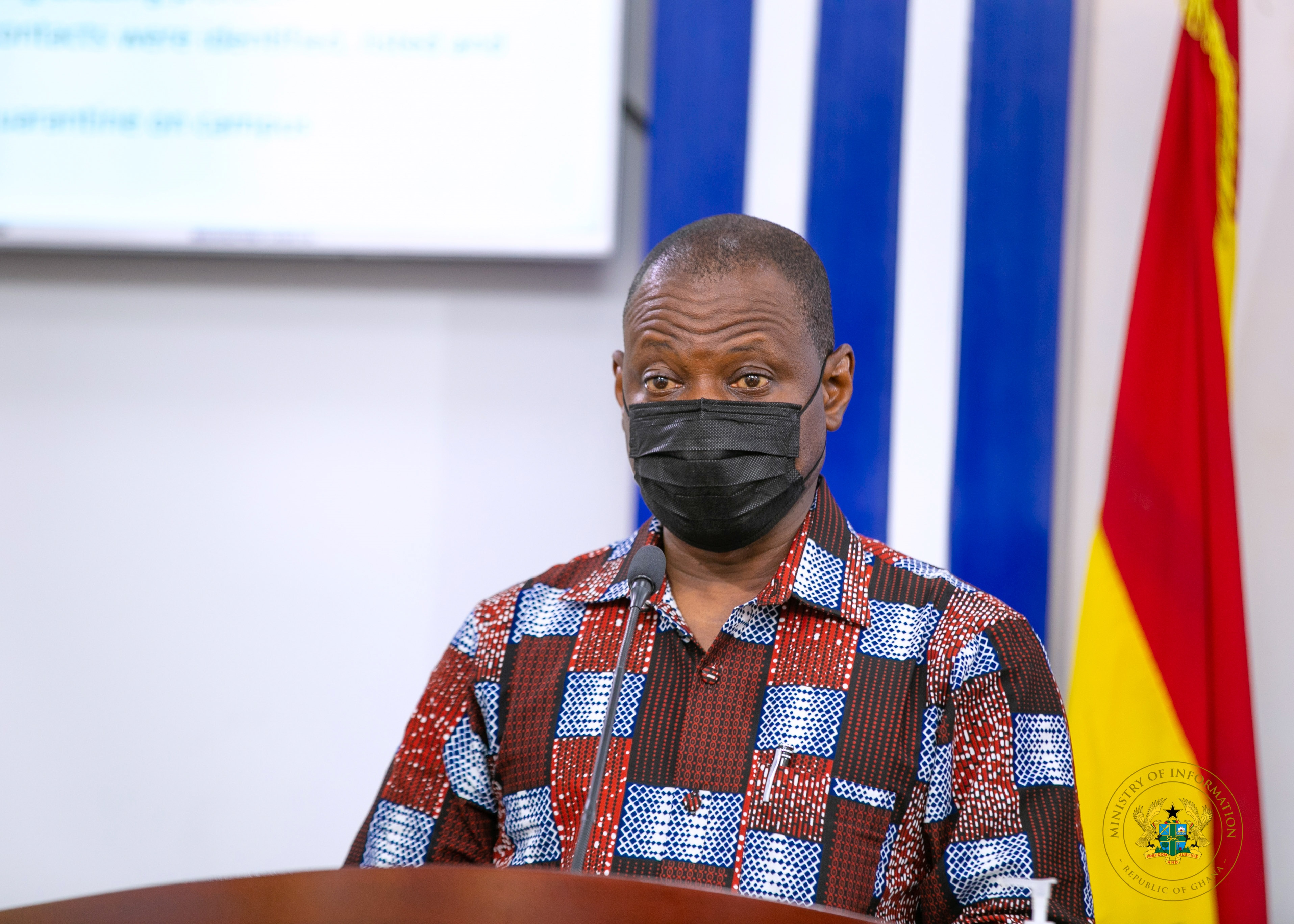 The Ghana Health Service (GHS) will test all day students of Achimota School for COVID-19 to help identify students and contain further community spread of the virus, following an outbreak in the school.

It said althogh not all cases of the outbreak at the school were caused by the Delta variant of COVID-19, a significant number were, and, therefore, testing all "at risk population", such as day students would help contain any further community spread of the virus in the school.

Presenting an update on the COVID-19 situation at a press briefing in Accra Sunday, the Director-General of the GHS, Dr Patrick Kumah-Aboagye, said disinfection and the strict enforcement of infection prevention and control protocol, commonly known as the safety protocol, were part of interventions being carried out to contain the outbreak in the school.

He said the GHS would review all cases in the school on a daily basis and continue aggressive health education for the students and other target groups in the school and surrounding communities.

Dr Kumah-Aboagye said as of last Saturday, 843 students and staff of the school had been sampled for testing.

He said 348 of the number were boarding students, 459 were day students, while 36 constituted teaching and non-teaching staff.

“Results for 550 samples have been released, out of which 135 were positive. Pending results are 293 (samples collected on July 3rd were from day students).

“All 135 cases at the time of diagnosis were either asymptomatic or had mild-to-moderate illnesses. One member of staff was among those affected,” he said.

He disclosed that approximately two-thirds of all the cases at the school had recovered.

He said all three were investigated for COVID-19, in line with the laid down protocol, and they tested positive.

That prompted the activation of the Public Health Emergency Rapid Response Teams (PHERRT) of the Greater Accra Region and the Okaikoi North Municipal Directorate of the GHS.

“All three students were isolated following existing protocol. Other symptomatic students and contacts were identified, listed and also tested for COVID-19. All contacts were placed in mandatory quarantine on campus,” Dr Kumah-Aboagye said.

Throwing more light on the COVID-19 situation in the school setting, the GHS director-general said 351 schools had recorded cases of COVID-19 since the full reopening of schools in January this year.

Cumulatively, 2,217 cases had been confirmed, with 96.8 per cent of them (approximately 2,147 people) recovering from the infection, he said.

“There are 48 active cases among students from two regions (Greater Accra - 46, Eastern -2). The Volta Region has recorded the highest number of cases (512), while the North East Region is the only region with no case,” he said.

As of June 30, this year, the GHS had administered more than 1.26 million doses of vaccines.

Dr Kumah-Aboagye debunked rumours that the vaccines were not effective against some of the COVID-19 variants confirmed in the country, explaining that research had proved that all existing vaccines were known to reduce the severity of illness for all known variants of COVID-19, but none provided 100 per cent immunity.

Dr Kumah-Aboagye said what people should be more concerned about was avoiding infection, which could only be done by strictly adhering to the safety protocol, regardless of whether one had been vaccinated or not.

He said the wearing of face masks, washing and sanitising of hands and observing social distancing should be strictly adhered to in order to beat the disease and all its variants.

He stressed that strict adherence was the way to go because the Delta variant had a higher and faster transmission rate.

“Non-adherence to the COVID-19 protocol and the confirmation of the Delta variant in the community can cause an increase in infections. Efforts are being made to increase access to vaccines for the general population as part of national interventions,” he said.

The Delta strain COVID-19 was first detected locally in April this year among international arrivals.

The detection of the strain in the community was confirmed last Thursday and the COVID-19 Task Force was informed about it the following day.

Dr Kumah-Aboagye expressed worry over the gradual increase in active cases over the past three weeks.

He said the daily average had risen from below 50 about two months ago to 80.

Dr Kumah-Aboagye said genomic sequencing had been made an integral part of the COVID-19 response to help better understand the characteristics of the virus in the country to inform appropriate response.

Genome sequencing is figuring out the order of DNA bases or the set of genetic material present in a cell of an organism. The human genome is made up of over three billion of these genetic letters.

The director-general said 1,212 COVID-19 samples had been sequenced, and that among variants of concern, the dominant variant was the Alpha strain.

The research institutions conducting the genome sequencing are the West African Centre for Cell Biology of Infectious Pathogens, the Noguchi Memorial Institute for Medical Research and the University of Health and Allied Sciences.

Writer's email: This email address is being protected from spambots. You need JavaScript enabled to view it..