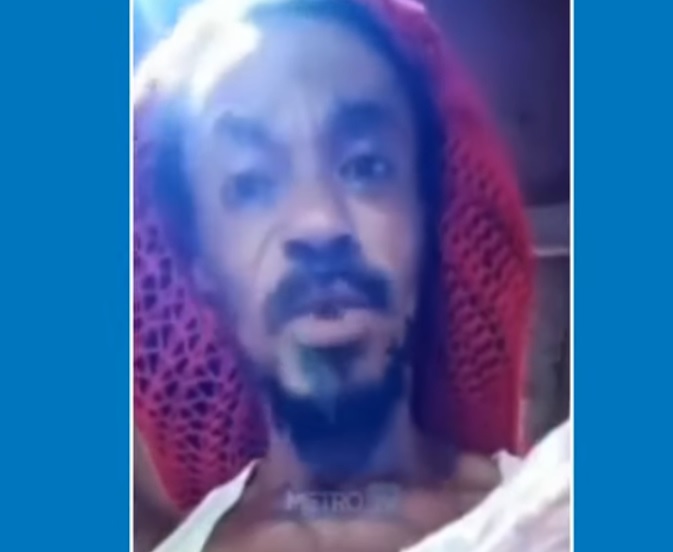 The father of one of the Rastafarian students who had admission issues at the Achimota School because of his dreadlocks, has alleged that his son has been very disobedient lately, and recently attacked him to the extent of injuring his hand.

Accusing the son of attacking him in a video he posted on social media, the father, Tereo Marghuy, said his son, Tyron Marghuy, injured his hand during the attack.

He showed the injured hand with the blood in the video he recorded and posted on social media.

He claimed he could not tell what kind of object the son had in hand and used but he held his hand so hard such that, when he released it, the injuries were on his hand.

Tereo Marghuy had said he wanted to slap the son but he held his hand.

In return, the father has threatened to kill the son if it happens again.

In the video, showing his injured hand, Tereo alleged he confronted Tyron for a misbehaviour and the boy, got angry and attacked him in the process when he attempted to slap him.

Tereo Marghuy said Tyron had an argument with his sister and as he tried to intervene, his young son assaulted him.

“This is what Tyron has done to my hands, he spoilt his sister’s tablet and they were supposed to take it to the repairer this morning”, he said in the video.

“The sister came to tell me they were taking the laptop to the repairer..., I went to see them in the room and she said Tyron is not ready. Long story short, they had argument and so I went back there to ask him why, and he just unplugged the laptop and started to walk over me and he's been doing this all these years, and which his mother tolerates”, Tereo alleged.

"She [mother] even asked me one time why I don't want anybody to have peace in this house when my son does something wrong and I'm telling him."

He said even before the Achimota case, he [Tyron] was so arrogant, and so I wasn't even ready to follow him anywhere, I went to the court with him and defended him just for the sake of humanity, for the sake of Rasta, if it had been only because of this boy, I wouldn't have gone," he added.

"This is the third time something like this is happening because he walked over me and I rushed at him, I wanted to slap him for doing that, he does it every time and he gripped my hand, so hard, I don't know if he had something or whatever with him, and this is what he has done," he said and showed the injured hand in the video.

He said the boy sees him returning from town with load and he doesn't care.

The father threatened that the next time it happens again, he was going to pay with his life and asked him to leave the house.

Watch Tereo's narrative in the attached video below

The Human Rights Division of the Accra High Court last year ordered Achimota Senior High School to admit the Rastafarian students, Tyron Iras Marhguy and Oheneba Nkrabea, who were denied admission by the school because of their dreadlocks.

In a ruling, the Human Rights Court One, presided over by Justice Gifty Adjei Addo, held that failure to admit the two students because of their dreadlocks, which is a manifestation of their religious right is a violation of their human rights, right to education and dignity.

The court, in separate judgments ordered Achimota School to admit the students to continue their education.

Ahead of the judgement, the court clerk instructed journalists to leave the courtroom with the exception of only parties to the case.

The court premises, was fully packed with Rastafarians who are sympathisers to Marhguy.

Marhguy, filed the suit through his father at the Human Right Division of the Accra High Court on March 31 this year to seek the enforcement and declaration of his right to education.

The suit has the board of governors of the Achimota School and the Attorney-General as first and second respondents respectively.

The Attorney General had argued previously in court that the applicant had no cause of action because nothing within the scope of his right to education and religion had been infringed upon.

Counsel for the Board of Governors of the Achimota School, Mr Kwesi Fynn also argued that the curtailment of the right of the Rastafarian students through the school’s rules was provided under Article 14 clause one of the constitution of Ghana.

However, counsel for Marhguy, Mr James Gawuga Nkrumah, insisted that the right of his client had been infringed.

The issue of refusal of admission to master Tyron Iras Marhguy by the headmistress of the school became the talk of the town months ago, with the Ghana Education Service, civil society organisations, NGOs and individuals offering divergent opinions about the matter.

The applicant, through the civil action was asking the court to declare that the failure and or refusal of the school to admit or enrol the applicant on the basis of his Rastafarian religious inclination, beliefs and culture characterised by his keeping of rasta is a violation of his fundamental human rights and freedoms guaranteed under the 1992 Constitution, particularly Articles 12(1); 23; 21(1)(b)(c); 26(1)); and 17(2) and (3).

Master Marhguy wanted the court to declare that the failure and or refusal of the school to admit or enrol him on the basis of his Rastafarian religious inclination, beliefs and culture characterised by his keeping of rasta is a violation of his right to education guaranteed under Articles 25(1)(b),m and 28(4) the 1992 Constitution;

He prayed the court for a declaration that the order directed at him by the representative of Achimota School to step aside during the registration process on the basis of his religious belief characterised by the keeping of rasta is a violation of his right to dignity guaranteed under Articles 15(1) and 35(4),(5) of the 1992 Constitution.

A declaration that there is no lawful basis for the school to interfere with the applicant's right to education based on his rasta through which he manifests or expresses his constitutionally guaranteed right to religion and to practice and manifest same.

He further urged the court for an order directed at the school to immediately admit or enrol the applicant to continue with his education unhindered.

The applicant asked the court for an order directed at the respondents to jointly and severally compensate the applicant for the inconvenience, embarrassment, waste of time, and violation of his fundamental human rights and freedoms.