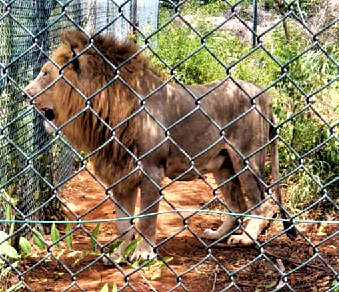 The Accra zoo closed down for investigations into an alleged lion attack
30.5k Shares

The Accra Zoo, located within the Achimota Forest, has been closed to the public pending the outcome of investigations into the bizarre circumstances under which a middle-aged man got killed by a lion in the zoo.

The zoo was cordoned off yesterday[ August 29,2022] to enable the police to carry out thorough investigations on the issue before it is reopened to the public.

The Corporate Affairs Manager at the Forestry Commission, Joyce Ofori Kwafo, who made this known to the media, said the Achimota Police had commencedinvestigations into the death of the unidentified man.

Mrs Kwafo said the commission would collaborate with the police to ensure thorough investigations since the findings would have a bearing on the safety of the zoo.

"We cannot understand why someone will break into where lions live.

Currently, we have handed over the issue to the Achimota Police and they have immediately begun investigations into the issue.

“We trust the police to get to the root of the matter," she said.

The body of the middle-aged man was found in the lion's den in the zoo at about 12 noon last Sunday.

The man is alleged to have been attacked and killed by the lions after he reportedly broke into their cage.

A Deputy Minister of Lands and Natural Resources, Benito Owusu-Bio, and the Chief Executive Officer (CEO) of the Forestry Commission, John Allotey, visited the zoo to ascertain the situation on the ground, after which the zoo was shut down.

When asked if there was any surveillance system at the Accra Zoo to help unravel the actual circumstances that led to the man's death, the Corporate Affairs manager answered in the negative, saying there was no closed-circuit television (CCTV) camera in the area.

"The place is a bit secluded and nothing like this has ever happened. We are currently doing renovation at the zoo but there is the possibility that CCTV cameras will be mounted in the area," she said.

Mrs Kwafo added that all the lions were still in the confined area and emphasised that once the investigations were concluded, the zoo would be reopened to the public.

"We want to assure members of the public that when investigations are concluded on this issue, the zoo will be reopened to the public.

“All the lions in the zoo are intact and pose no danger to the public,” Mrs Kwafo assured.

A source at the Police Headquarters yesterday confirmed to the Daily Graphic that investigations had commenced into the matter.

The source said a team of investigators had been deployed to go into the case.

When asked what the latest update was, the source said: "It is early days yet, but I will assure you that we will keep the public informed".

The source also said the victim was yet to be identified.

"After the necessary forensic examination of the scene, the body was removed and has been deposited at the Police Hospital morgue for autopsy," the source added.