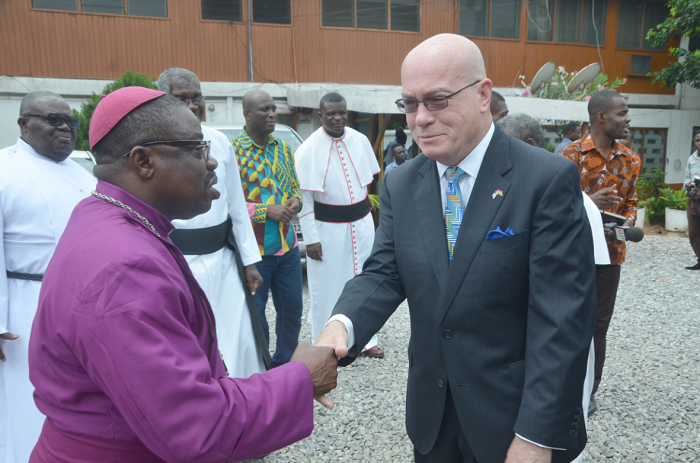 The Accra Diocese of the Anglican Church has organised a day’s advocacy and training workshop on child trafficking to empower 35 clergymen to make meaningful contributions to combat the menace in their communities.

They were taken through community dynamics, human rights laws, Christian justice and the realities of child trafficking, with the aim to broaden their knowledge on the subject.

The training programme forms part of a five-year campaign of the Anglican Diocese of Accra and the United States Embassy to combat child trafficking in Ghana, to focus on awareness creation through the use of symbols and slogans, community mobilisation and outreach educational programmes, capacity building, institutional strengthening and networking.

In his address, the Bishop of the Anglican Diocese of Accra, the Rt Rev. Dr Daniel Mensah Torto, reiterated the need to intensify efforts to support the elimination of child trafficking in the country.

He explained that the workshop was also to engage stakeholders and relevant authorities to adopt measures to address the causes of child trafficking in the country and intensify education among some parents who led their children into the menace.

At a media briefing held in Accra, Rt Rev. Torto explained that the strategy would focus on empowering rescued victims from the community through educational programmes, capacity building and networking.

He said a community shelter called the “Hope Community for the Resettlement of Rescued Trafficking Children’’ would be completed next year to help check abuse and educate the victims.

According to him, the project would be fully funded by the Anglican Church in partnership with the Embassy of the United States to fight child trafficking.

For his part, the US Ambassador to Ghana, Mr Robert P. Jackson expressed the US government’s readiness to support the fight against child trafficking in Ghana.

He urged clergymen to use their influence to educate the public and also urged the public to join in the fight to debunk the notion of normalising the recruitment of children for forced labour.

“Mr Jackson explained that the United States had signed a $5 million child protection compact agreement with Ghana to combat child trafficking, adding that his government supported Ghana with GH¢32 million to get children working in cocoa and mining sectors out of those areas’’.