Abrokwa sworn-in as President of Rotary Club of Accra Labone 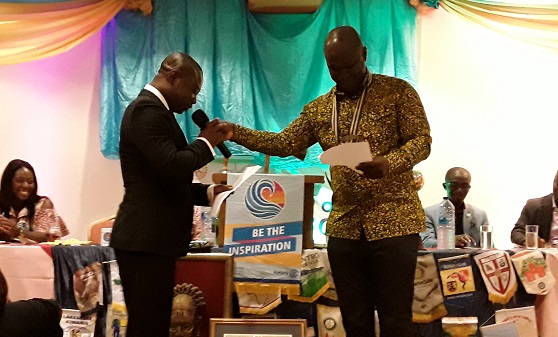 Abrokwa sworn-in as President of Rotary Club of Accra Labone

new Directors led by Rotary President (RP), Yaw Abrokwa will manage the Club from July 2018 to June 2019 and will execute an afforestation project christened: "We Plant, We Live" Be the Inspiration which aims to plant 200 trees in the Greater Accra Region.

In an address before handing over the mantle to RP Abrokwa on Thursday, July 12 in Accra, the Immediate Past President (IPP) of the Club, Yaw Agyekum urged all 42 members of the club to rally around and support the new administration to ensure the growth of the club.

He said he had no doubt that RP Abrokwah will exceed the expectations of the members with his innovative projects.

In his first address after taking the oath of office as RP, Mr Abrokwa said he would ensure that the club is always in the news for positive reasons with positive projects such as "We Plant, We Live".

According to him, in order to successfully execute the project, he would lead an intensive fundraising drive which will be used to fund 200 seedlings to plant trees in Accra.

He said the beneficiaries of the project will be schools, hospitals and other public buildings in the Labone area.

Mr Abrokwa disclosed that asides the 200 seedlings that will be planted, each ROCAL member will also be encouraged to plant and nurture a tree in their house.

A Chinese auction conducted at the ceremony raised GHC 3,150 as seed money with the individual who made the winning bid receiving two smoothie machines.