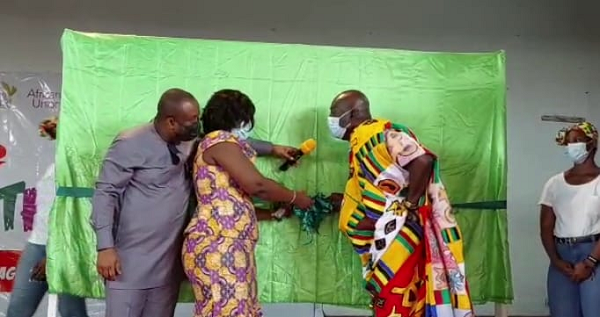 An average of 112,800 teenage girls in the country are impregnated every year.

According to figures collated from district health information management systems of the Ghana Health Service (GHS), Ghana recorded 555,575 cases of teenage pregnancy between 2016 and 2020, with 13,444 of the girls being between 10 and 14 years.

This came to light at the commemoration of this year’s Africa Youth Day in Cape Coast in the Central Region yesterday on the national theme: "Safeguarding our teenage girl: A clarion call to action”.

Globally, the commemoration, which is the 15th, was on the theme: “Defining the future today: Youth-led solutions for building the Africa we want”.

There was also the launch of the "Safeguarding the teenage girl" campaign to sensitise communities to the need to reduce teenage pregnancy in the Central Region.

The event was attended by pupils, students and youth groups, including representatives of agencies and organisations.

The stakeholders called for the inclusion of boys in the sensitisation against teenage pregnancy, saying not much would be achieved if men and boys were excluded from the educational campaigns.

They also demanded that counselling sessions in schools must be intensified, while reproductive health services should also be made accessible to pupils and students.

The Chief Executive Officer (CEO) of the National Youth Authority (NYA), Mr Pius Enam Hadzide, said Agenda 2063 mandated the paying of special attention to the gender dimension in building “the Africa we wanted”.

That, he said, entailed ending all violence and discrimination against women, as well as taking positive steps to realise their economic, social and political advancement.

According to Mr Hadzide, defining the future today required envisaging what challenges might exist in the future, adding that ensuring a more secure future for African women meant addressing the impediments to their comprehensive development, including removing the scourge of teenage pregnancy.

He mentioned heightened risks of premature labour, spontaneous abortions, stillbirths, the development of fistula and higher rates of maternal mortality as some of the challenges associated with teenage pregnancy, saying those constituted a major threat to the health and well-being of women.

The Central Regional Minister, Mrs Justina Marigold Assan, said the youth remained the greatest human resource of any nation and, therefore, much attention should be paid to youth activities to guide and lead them to become better future leaders.

On how to prevent teenage pregnancy, she urged stakeholders in the country to bring their expertise to bear to help address the challenges.

The Central Regional Director of the NYA, Mr Emmanuel Ofosu Anim, pledged his outfit’s commitment to work towards reducing the incidence of teenage pregnancy in the area.

The Omanhen of the Oguaa Traditional Area, Osabarimba Kwesi Atta II, said the onus was on parents and guardians to help make the needed changes in their homes and communities.