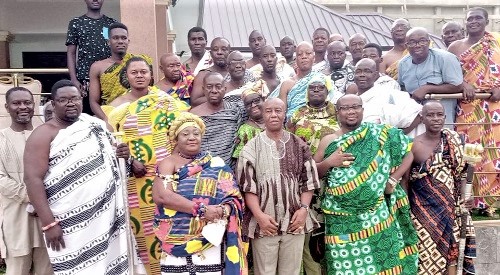 Activities to mark the 30th anniversary of the coronation of the chief of Abetifi in the Kwahu Traditional Area, Achamfour Asiedu Agyeman III, have been launched.

Achamfuor Agyeman III, who is also the Adontenhene of the traditional area and the 18th chief of Abetifi, was enstooled in 1992.

The celebrations, which began with the launch, will be climaxed on Sunday, April 17 with a grand durbar at Abetifi.

Launching the event at Abetifi last Saturday, the Chairman of the Anniversary Planning Committee, Kwadwo Bamfo Anson, said the activities would not only celebrate Achamfour for his sterling leadership over the past 30 years but it would also enable the youth to be acquainted with the customs and traditions of Abetifi in particularly and the Kwahu people in general.

“The history of Abetifi and the Kwahu people, in general, is often not well told. Celebrating Achamfour’s 30th anniversary will not only celebrate him for his contribution to the peace and stability Abetifi enjoys but also help tell the story to educate and inform, particularly the young generation.

“The date has also been chosen to coincide with the homecoming of Kwahus so there will be more activities to bring us together during that period,” Mr Anson explained.

Some of the traditional and social activities earmarked to be undertaken include a special trip for the people of Abetifi to retrace their migration roots from Abene to present town on Wednesday March 30, the special purification rites by nananom and elders on March 31 for the traditional celebrations.

On April 2, there will be a health screening for the people of Abetifi and Abene, as well as a blood donation exercise for the Abetifi Hospital.
Achamfour and his elders will lead a tree planting exercise on April 11, followed by a general cleaning on April 12.

The traditional rites resume with Achamfour Agyeman III taking a sacred bath after which he will lead the sprinkling of mashed yam through the Abetifi township on April 14.

That same day, a new palace for the queenmother, Nana Ama Amanua II, will be inaugurated and dedicated, to be followed by a sacred wash of identical twins and special prayers to be observed by Muslims.

Side attractions will include food bazaar, football matches and an event to teach the young people how to wear traditional clothes.

On April 13, the date on which Achamfour Agyeman III was enstooled, he will sit in state to receive homage from indigenes, dignitaries and guests to commemorate the day.

During the climax on Sunday April 17, a grand durbar of nananom and people of Abetifi and by extension, chiefs of the Kwahu Traditional Council will be present to celebrate the Adontenhene.

“All the activities will help us to have something to celebrate culturally as a people,” Mr Anson emphasised.

Nana Ama Amanua II, who is also the Kwahu Adontenhemaa, told journalists that it was necessary to thank God and the gods for all the 30 years they had guided the Abetifihene to lead his people into prosperity.

She indicated that during the celebrations, Achamfour would also outline his vision for Abetifi for the next decade, emphasising that the occasion would be an opportunity for people to learn about the tradition and culture of Abetifi and Kwahu.

“Often times, people think our festival is the homecoming that coincides with the Easter. That is an erroneous impression that these celebrations will seek to correct,” Nana Amanua II explained.